Home » Who killed the Quark?

Intel is phasing out its lightweight Quark processors, with final orders wrapping up this summer, and shipments ending in 2022. The Quark suffered from growing competition from high-end MCUs and low-end Cortex-A7 chips and the lack of a clear market focus.

When we read in AnandTech recently that Intel was discontinuing its Quark CPUs, the news was so unsurprising we almost decided to skip it. But perhaps it’s worthwhile to reflect on why this highly promoted crossover processor, which aimed to find a niche between low-end Cortex-A SoCs and high-end microcontroller units (MCUs), failed to catch fire.

According to AnandTech, Intel is phasing out all its Linux-ready Quark X10x SoCs and Quark SE and D1000/D2000 MCUs. Customers can post their final orders on July 19, and shipments on those orders will continue until July 17, 2022. 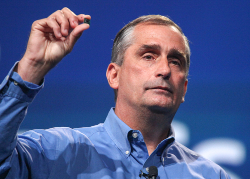 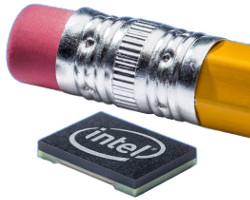 Former Intel CEO Krzanich with Quark chip in 2013 (left) and Curie module
(click images to enlarge)
The fate of the Quark seemed to be sealed in June 2017, when Intel announced it was discontinuing its Intel Joule and Intel Edison COMs and its open-spec Galileo Gen 2 SBC. The Galileo and Galileo II boards ran Linux on a Quark X1000 while the Edison, which was originally announced as a Quark-driven module, eventually shipped with an oddball “Tangier” Atom SoC. The Quark was used only as a co-processor.

Intel then launched the MCU-like Quark D1000, Quark D2000, and Quark SE models designed to run RTOSes like Zephyr instead of Linux. Intel backed the chips with a major marketing push for its tiny Curie wearable module, which uses a Quark SE. The Curie never took off, however, and in July 2017, Intel discontinued the Curie.

In the middle of this decade we saw a number of IoT gateways that ran Yocto Project stacks on the Quark X1000, but the combination appeared on relatively few third-party embedded boards. The last Quark-based embedded computer we saw was Advantech’s UBC-222, which launched a year ago.

When Intel announced the death of the Curie, it also discontinued its Curie-based Arduino 101 SBC. Arduino compatibility was always one of the key draws of the Quark, and several Edison breakout boards supported Arduino shields.

Yet, the Arduino community never embraced the Curie, and as the Linux-driven Raspberry Pi increasingly dominated the low-end hacker-board world, Arduino compatibility became less of a must-have feature. It certainly didn’t mean much to the luxury smartwatch vendors Intel was trying to woo with its Curie.

The x86 community did not think much of the Quark, either. Its progress was slowed initially by the fact that the Quark was originally announced only with Pentium ISA compatibility. By the time Intel added x86 compatibility it was too late.

The Quark had more serious challenges, however. The smartwatch market was slow to take off, and the low-end wearables market that the Curie targeted was powered primarily by increasing powerful Arm Cortex-M MCUs. The growing support for wireless technology on these chips carved out a big chunk of the Quark’s market.

Aaeon’s Quark-based AIOT-QA, -QG, and -QM IoT gateways from 2016
(click image to enlarge)
(click image to enlarge)
Meanwhile, Arm’s Cortex-A7 design increasingly dominated the low-end Linux IoT market. The budget IoT gateways and other power-sipping IoT gear that used Quarks or MIPS chips in 2014 and 2015 had by 2017 largely switched to Cortex-A7 SoCs like NXP’s i.MX7 i.MX6 UL or the Allwinner A20, just to name a few.

Many of the SBCs in our recent catalog of 122 hacker boards that launched in the previous six months were Cortex-A7 designs. These include the MediaTek MT7623N based Banana Pi BPI-R2, the Rockchip PX2-SE driven Firefly-PX3-SE, the Allwinner V5 V100 powered Lindenis V5, the Allwinner H2+ or H3 based NanoPi Duo and Duo2, and the Rockchip RK3229 based ReSpeaker Core v2.0.

The Quark X1000 also felt pressure from Intel’s own Atom family of SoCs, which these days are more often tagged with the Celeron and Pentium brands. Atom SoCs have gradually improved power efficiency while also boosting performance, especially in graphics.

This was especially true of quad-core models. In the circa-2013 Bay Trail generation, the quad-core E3845 clocked in at 10W. Fast forward to the latest Gemini Lake generation, and the quad-core Pentium Silver N5000 has a 6.5W TDP. The drop in TDP was not significant enough for many embedded hackers, who continued to migrate to Arm, but it was enough to position some Atom chips closer to the Cortex-A7.

Perhaps Intel’s largest impediment was itself. It could never quite decide what the Quark was for and was never able to capture the developer market. The Curie was especially notorious for spotty public documentation and the requirement for signing NDAs to get the full specs.

The low-end chip market is tough going and marked by low margins. Intel had the market clout to succeed, but it was earning such high profits from its popular Xeon and Core chips, the Quark was quickly neglected. To a lesser degree, its Atom line has suffered from the same dynamics.

With IoT morphing into edge computing, and with the dropping costs for Cortex-A53 SoCs, the embedded market is shifting upward. Edge gateways are increasingly asked to process video and do analytics, which need more powerful chips. Still, there’s room at the bottom for more innovation on power-efficient SoCs that can still run Linux.

This article originally appeared on LinuxGizmos.com on January 30.

Who killed the Quark?