Congatec’s 8th Gen UE-series lineup (left to right): Conga-IC370, Conga-JC370, and Conga-TC370
(click image to enlarge)
This is the first we’ve heard of the Whiskey Lake UE models, which do not appear to be publicly documented. The processors appear to be otherwise identical with the 8th Gen U-series.

Congatec claims its new boards “are the first in the industry to offer long-term availability of 10+ years.” The boards offer “10+ and on basis of specific last time buy contract up to 15 years long-term availability right from the start,” stated Christian Eder, Congatec Director of Marketing. He noted that most embedded boards offer 7-year availability, which is insufficient for the transportation and mobility sector, as well as many medical devices, industrial controls, embedded edge clients, and HMI systems. Congatec’s 8th Gen Coffee Lake-H based Conga-TS370 Type 6 module goes longer than that, but is still limited to “up to” 10-year availability.

Congatec touts the quad-core i7 and i5 Whiskey Lake chips for their performance boost of up to 58 percent compared to previous U-Series processors. ASll the Whiskey Lake CPUs have an “improved microarchitecture” and provide “efficient task scheduling,” says the company. They also support RTS hypervisor software “to allow additional optimization of I/O throughput from the input channels to the processor cores.” 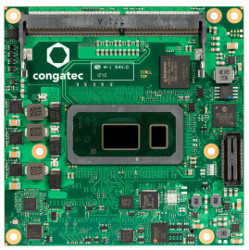 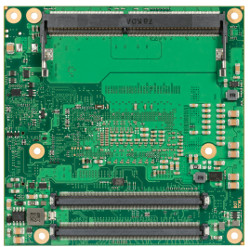 Common features among the Conga-TC370, Conga-JC370, and Conga-IC370 include support for up to 64GB DDR4-2400 via dual channels. They all provide native USB 3.1 Gen 2 for transfer rates of 10Gbps and offer Gigabit Ethernet with TSN (Time-Sensitive Networking) real-time support.

The new boards support 0 to 60°C temperatures and offer humidity resistance rated at “10 to 90% r. H. non cond.” They all ship with TPM 2.0 security and the Congatec Board Controller, which offers features like a multi-stage watchdog, power loss control, and hardware health monitoring. 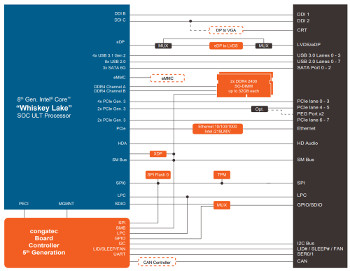 Conga-TC370 block diagram
(click image to enlarge)
For video, you get 2x DisplayPort 1.2 or HDMI 2.0a ports (or dual DP++), as well as an eDP 1.4. Other features include embedded BIOS boot, update, and security functions and optional active and passive cooling solutions.

Aside from the new processor models, the now shipping Conga-JC370 and Conga-IC370 appear to be the same as described in our March coverage. That report offers detailed spec lists and block diagrams. 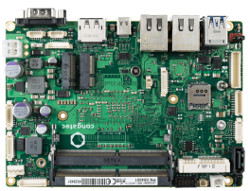 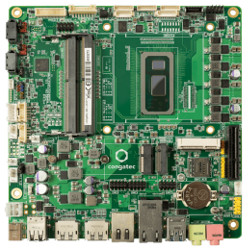 Conga-JC370 (left) and Conga-IC370
(click images to enlarge)
The 146 x 102mm Conga-JC370 appears to be Congatec’s first 3.5-inch SBC. Display features include a DP++ port, with the possibility of a second DP port via the USB 3.1 Gen 2 Type-C port. The Type-C can also draw power as an alternative to the 12-24V DC input. In addition to the standard LVDS or eDP interface, there’s an option for a second LVDS via an adapter. 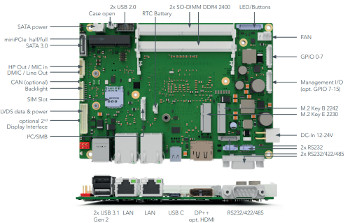 One of the 2x GbE ports support TSN. Other features include 2x USB 3.1 Gen 2 ports, an RS232/422/485 port, and internal USB 2.0, serial, GPIO, powered SATA III, and optional CAN interfaces. For expansion, there’s a mini-PCIe slot and micro-SIM slot, as well as an M.2 M-key storage slot with Optane support and general-purpose M.2 B- and E-key slots.

The 170 x 170mm Conga-IC370 thin Mini-ITX board shares several features with the Conga-JC370, including 2x GbE ports, a single USB 3.1 Gen. 2 port, and a 12-24V input. Expansion features are the same except that instead of the M.2 M-key storage socket you get a second SATA III port. The Conga-IC370 also adds a PCIe x4 slot. 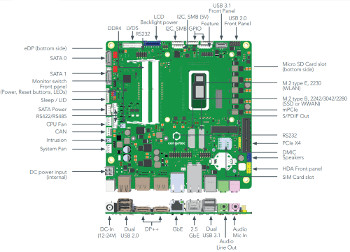 Conga-IC370 detail view
(click image to enlarge)
The Conga-IC370 lacks the 3.5-inch model’s Type-C port, but you get dual DP++ ports, LVDS, and eDP. For audio, there’s SPDIF in addition to dual audio jacks. The dual USB 2.0 interfaces have been expressed as coastline ports.