Vesper recently launched the VM1010, which is the first wake-on-sound MEMS microphone that consumes nearly zero power. It allows consumers to voice-activate battery-powered smart speakers, smart earbuds and TV remotes without draining the battery. The inaugural member of Vesper’s ZeroPower Listening MEMS microphone product line, the VM1010 is a tiny, ultra-rugged piezoelectric MEMS microphone that that enables you to offer touchless user interfaces to consumers without any power-consumption penalty. 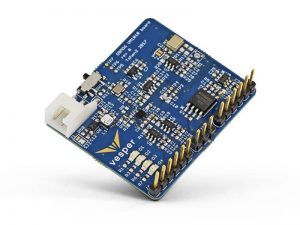 Consuming a mere 6 µA while in listening mode, the Vesper’s VM1010 extends battery life to months or years by enabling the rest of the system to completely power down while waiting for a keyword. That is a major advantage to designers who can create an entirely new class of rugged, battery-operated, voice-interface devices that work anywhere.

The VM1010 is a low-noise, high dynamic range, single-ended analog output piezoelectric MEMS microphone. It features a configurable voice zone, allowing voice in a 5-foot radius to 20-foot radius-zone to trigger the system and increase to a normal operation mode. When the environment is quiet, the system can enter ZeroPower Listening mode and the entire system can power down.

Like other Vesper piezoelectric MEMS microphones, the VM1010 sets the standard for reliability and stability, even in harsh environments. It is dustproof to IP5X and waterproof to IPX7. Because it is stable in all environments, the VM1010 microphones are also ideally suited to microphone arrays, which are critical to far-field audio applications. Drawing a mere 6 µA of power in always-listening mode, the VM1010 extends battery life 10× or more.

Vesper’s MEMS microphones represent a radical shift from the capacitive MEMS microphones that are shipping by the hundreds of millions in smartphones, hearables, smart speakers, Internet of Things devices and connected cars. Vesper’s piezoelectric design is waterproof, dustproof, particle-resistant and shockproof. Piezoelectric MEMS microphones make voice-interface devices practical in any environment, and they are also ideally suited for far-field applications such as microphone arrays.