Variscite is spinning out yet another pin-compatible version of its 50 mm x 25 mm DART-6UL computer-on-module, this time loaded with NXP’s headless new i.MX6 ULZ variant of the single Cortex-A7 core i.MX6 UL. Due for a Q4 launch, the unnamed module lacks display or LAN support. It’s billed as “a native solution for headless Linux-based embedded products such as IoT devices and smart home sensors requiring low power, low size and rich connectivity options.”

DART-6UL with iMX6 ULZ
(click image to enlarge)
The lack of display and LAN features mirrors the limitations of the i.MX6 ULZ, which NXP refers to as a “cost-effective Linux processor.” The headless, up to 900  MHz Cortex-A7 ULZ SoC offers most of the I/O of the of the i.MX6 UL/ULL, including ESAI, S/PDIF, and 3x I2S audio interfaces, but it lacks features such as the 2D Pixel acceleration engine and Ethernet controllers. 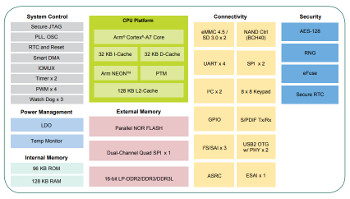 DART-6UL-5G (left) and DART-6UL v1.2
(click images to enlarge)
The upcoming i.MX6 ULZ based version, which we imagine Variscite will dub the DART-6ULZ, has the same Wi-Fi-ac module with Bluetooth 4.2 BLE. Like the latest versions of the other DART-6UL modules, the module can be clocked to 900 MHz.

The “cost effective” ULZ version differs in that it lacks the other models’ touch-enabled, 24-bit parallel RGB interface and dual 10/100 Ethernet controllers. Other subtracted features compared to earlier models include dual CAN, parallel camera, and “extra security features.”

The pin compatible DART-6UL with iMX6 ULZ will offer the i.MX6 ULZ SoC with “optional security features,” which include TRNG, AES crypto engine, and secure boot. The 50 mm x 25mm module will ship with 512MB DDR3L, which was the previous maximum of the now up to 1 GB RAM DART-6UL. The storage range is similar, with a choice 512 MB NAND and up to 64 GB eMMC.

The ULZ version of the DART-6UL will support existing development kits, which are based on the VAR-6ULCustomBoard. This 100 mm x 70 mm x 20 mm carrier board offers a microSD slot, a USB host port, and micro-USB OTG and debug ports, as well as features that are inaccessible to the ULZ, including dual GbE, RGB, LVDS, CAN and camera interfaces.

This week Variscite announced another DART module based on another new NXP SoC. The DART-MX8M-Mini module taps a 14nm-fabricated i.MX8M Mini SoC variant of the i.MX8M with one to four 2GHz Cortex-A53 cores and a 400 MHz Cortex-M4, plus scaled down 1080p video via MIPI-DSI.

The DART-6UL with iMX6 ULZ will be available in the fourth quarter. The DART-6UL/ULL/ULZ product page notes that the lowest, volume-discounted price is $24, which likely pertains to the ULZ part. More information may be found in Variscite’s announcement.

This article originally appeared on LinuxGizmos.com on September 19.