Variscite announced Linux-powered “VAR-SOM-MX8” and “SPEAR-MX8” modules with an up to an i.MX8 QuadMax SoC plus up to 8GB LPDDR4 and 64GB eMMC. It also previewed a VAR-SOM-6UL COM.

At Embedded World in Nuremberg, Germany, Variscite showcased its Linux and Android driven i.MX8-family computer-on-modules, including new VAR-SOM-MX8 and SPEAR-MX8 modules that feature NXP’s highest-end i.MX8 SoC up to a QuadMax model (see farther below). We have already covered most of the other showcased products, including the 14nm fabricated, quad -A53 i.MX8M Mini based DART-MX8M-Mini. When we covered the DART-MX8M-Mini in September, Variscite didn’t have an image or product page, but both are now available here 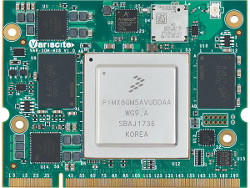 VAR-SOM-MX8 (left) and previously announced DART-MX8M-Mini
(click images to enlarge)
Other showcased COMs that we covered in recent months include the quad -A35 i.MX8X based VAR-SOM-MX8X and the quad -A53 i.MX8M based DART-MX8M. Variscite also announced a VAR-SOM-6UL module with support for the i.MX6 UL (UltraLite), ULL, and most recent ULZ low-power IoT SoCs. The board has yet to be fully documented, but we’ve listed what’s available farther below.

Due to ship with the similar, but more advanced, SPEAR-MX8 (see farther below) in the second quarter, the 67.6 x 51.6mm VAR-SOM-MX8 is pin-to-pin compatible with other VAR-SOM modules, including the new wireless-enabled version of the circa-2014 VAR-SOM-MX6. 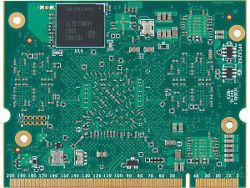 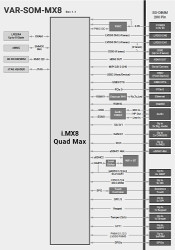 Other i.MX8 SoCs that support both the QuadMax and QuadPlus include Congatec’s Conga-SMX8 SMARC module, which also offers the DualMax variant. The others focus on the QuadMax, including the Toradex Apalis iMX and iWave iW-RainboW-G27M.

Media I/O includes HDMI v2.0a, eDP 1.4, and DP 1.3, all with resolution up to 4Kp60. There are also MIPI-DSI and dual-channel LVDS connections for up to 1920 x 1080 pixels with resistive or capacitive touch support. For audio, you get analog I/O, a headphone driver, digital and analog stereo mic support, and I2S/SAI digital audio.

The SPEAR-MX8 is only slightly larger than the VAR-SOM-MX8, at 68 x 55mm, but it packs in a lot more features. On the other hand, it lacks the pin-to-pin compatibility with other VAR-SOM models. The module offers only the high-end i.MX8 QuadMax. 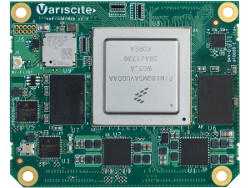 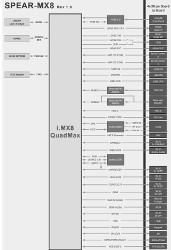 SPEAR-MX8 and block diagram
(click images to enlarge)
The SPEAR-MX8 appears to have all the features of the VAR-SOM-MX8 with several key additions. These include support for SATA III storage, an HDMI 1.4 input, and dual MIPI-CSI2 camera links. It adds a third USB connection, which is variably listed as a second USB 3.0 and a second USB 2.0 OTG. You also get a second PCIe link and a third CAN port. The module has a heftier 3.4-4.5V DC input.

Variscite did not have much to say about the upcoming VAR-SOM-6UL module, which like the smaller, 50 x 25mm DART-6UL, uses a slightly stripped down i.MX6 ULZ SoC in addition to the UL and ULL models. All these single Cortex-A7 SoCs, which are here clocked to 900MHz, are notable for their low power consumption.

The VAR-SOM-MX8 and SPEAR-MX8 modules are available in eval kits for “early partners” and will launch in Q2. There’s no ship date for the VAR-SOM-6UL, which is now open for pre-orders for eval kits and samples.

This article originally appeared on LinuxGizmos.com on February 22.

Product News Step-Down Converters Save Energy and Space in IoT …