Avnet has unveiled a minor upgrade to its open-spec, 96Boards CE form-factor Ultra96 SBC. The Ultra96-V2 retains the $249 price and core features of the Ultra96, including the Arm/FPGA hybrid Xilinx Zynq UltraScale+ MPSoC, but it also makes a few key additions.

The biggest touted improvement is a new Microchip wireless module with the same 802.11n Wi-Fi capability, but with Bluetooth improving to 5.0 BLE. The major advantage here is that the module is said to be pre-certified in 75 countries. 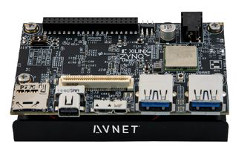 Other new features include an Infineon power management IC (PMIC) and dedicated headers for UART and JTAG. The product page suggests that the previous I2C header has been removed, with I2C now being available only on the 40-pin low-speed header, but the block diagram indicates otherwise. There also appear to be four new LEDs.

Like the original, the Ultra96-V2 runs PetaLinux on the Zynq UltraScale+ MPSoC with a 1.5GHz quad-core, Cortex-A53 CPU block, a Mali-400 MP2 GPU, and a ZU3EG A484 FPGA — one of the lower-end UltraScale+ FPGA options. The SoC also features 2x 600MHz Cortex-R5 MCUs with vector FPUs and memory protection units for improved real-time processing. Avnet recently released a MSC SM2S-ZUSP module billed as the world’s first Zynq UltraScale+ based SMARC module.

As before, the SBC provides 2GB of Micron LPDDR4, and boots from a 16GB Delkin microSD card pre-loaded with Xilinx’s PetaLinux. Major ports include mini-DP, 2x USB 3.0, and single USB 2.0 host and micro-USB 3.0 ports.

Specifications listed for the Ultra96-V2 include:

The Ultra96-V2 is available for pre-order at $249, with shipments due by May, according to the announcement and June 4 per the shopping page. More information may be found on Avnet’s Ultra96-V2 product page.

This article originally appeared on LinuxGizmos.com on March 27.