Although Adlink was not on AMD’s list of hardware launch partners mentioned in this morning’s Ryzen Embedded V2000 announcement, the company unveiled what appears to be one of the first products that have adopted the x86 SoC, which offers 7nm fabricated Zen 2 cores.

Applications include ultrasound image processing, 4K high speed video encoding and streaming, embedded gaming and infotainment, and AI inferencing at the edge. Adlink has launched only one other Ryzen Embedded based product: the V1000-based AmITX-RZ-G Mini-ITX board.

There are two hexa-core and two octa-core models led by a V2748 with 2.9GHz base and 4.25GHz boost rates and a 35-54W TDP. Two of the models offer 10-25W TDPs. The Radeon graphics cores provide 6x or 8x CPU cores and up to 1.6GHz rates. Other graphics features supported on the Adlink module include HEVC 10-bit hardware encode and decode, DirectX 12, OpenGL 4.6 and ES 3.X, and OpenCL 2.1.

The cExpress-AR can load up to 64GB DDR4-3200 and offers dual SATA III interfaces for storage. There are 6x PCIe x1 Gen3 lanes and a PCIe x8 Gen2 interface.

The module provides a 2.5GbE controller and supports 4x USB 3.2 ports, which can either be the 5Gbps Gen1 or 10Gbps Gen2 variety, depending on the carrier board. Other features include 4x USB 2.0, 2x UART, 8-bit GPIO, LPC, SMBus, I2C, debug headers, TPM 2.0, a SEMA Board Controller, and Super I/O support. 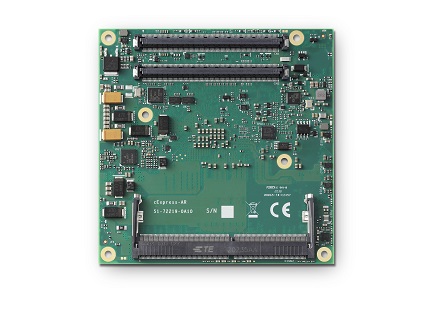 The cExpress-AR supports up to 4x independent 4K displays via 3x DDI interfaces configurable as DisplayPort 1.4, HDMI 2.1, or DVI. You can get the fourth 4K display if you go for the optional eDP instead of the single/dual channel LVDS interface. You can also optionally swap the DP for an HD-ready VGA interface.

HD audio is supported on the Express-BASE6 carrier board that forms the core of the optional COM Express Type 6 Starter Kit Plus. The board has a Realtek ALC886 codec and a variety of PCIe slots in addition to standard ports like GbE and USB 3.0. More details on the Express-BASE6 carrier may be found in our report on Adlink’s 8th Gen Coffee Lake based Express CF/CFE Type 6 module.

No pricing or availability information was provided for the “preliminary” cExpress-AR. More information may be found in Adlink’s announcement and product page.

This article originally appeared on LinuxGizmos.com on November 10, 2020.