Lauterbach recently announced its support for the Spansion HyperFlash Memory with the TRACE32 tools. HyperBus Interface was introduced by Spansion in 2014 as an improvement on today’s low pin count memory interfaces and has been broadly implemented by the system-on-chip (SoC) manufactures. 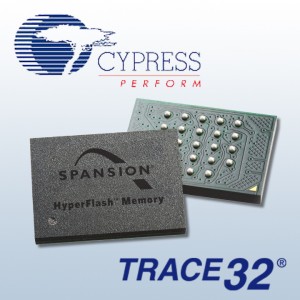 HyperFlash Memory is based on the HyperBus interface and provides the important characteristics such as low latency, high read throughput, and space efficiency. TRACE32 tools support the HyperFlash memory with the intuitive, fast, and flexible Flash Programming feature that also provides you with control of reading, displaying, and erasing the content of the flash memory. The content is displayed in a standard hex dump, which allows the contents to be checked quickly. The tool supports the pairing of HyperFlash memory with the HyperBus interface and also with the ordinary Quad SPI controller.