Toshiba Electronics Europe has announced a new ARM Cortex-M4F based microcontroller for use in secure systems control. The TMPM46BF10FG expands its existing TX04 range and adds enhanced security features that are well-suited to applications in Internet of Things (IoT) devices, energy management systems, sensor technology, and industrial equipment. 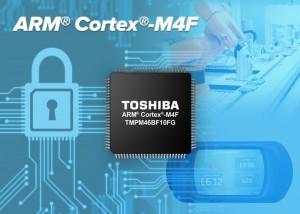 To provide additional levels of safety, the IC includes a 16-channel interrupt input and a clock-independent watchdog timer, which operates separately from the system clock, improving the safety of system functions. In the case of a system clock malfunction, the watchdog timer is still capable of detecting errors.

The TMPM46BF10FG incorporates a true random number generator (TRNG: SP800-90C standard) through the combination of a random entropy seed generation (ESG) circuit and Hash-DRGB created by the secure hash processor (SHA) and software program. This meets the robust standards of security that are required in network communications. The hardware based AES encryption/decryption process meets FIPS180-4 and FIPS197 standards and reduces the load on the CPU, in combination with a random seed generation circuit (ESG), and a multiple-length arithmetic (MLA) used to calculate elliptic curves for asymmetric ciphers.

Samples are now available. Mass production will begin in October.