The Open-Q 820Pro μSOM is a pin-compatible drop-in replacement for the two-year old Open-Q 820 µSOM and offers a similar layout and 50 x 25mm footprint. The biggest difference is an upgrade from Qualcomm’s Snapdragon 820 to the faster, second-gen Snapdragon 820E, an embedded-focused version with long lifecycle support. As a result, the Open-Q 820Pro μSOM has a 9 percent faster CPU and 5 percent faster GPU at the same power consumption, claims Intrinsyc.

Otherwise, the 820Pro module is pretty much the same as the 820. For displays, you get an HDMI port and dual MIPI-DSI ports for triple display support at up to 4K @ 60fps video. Three MIPI-CSI connectors can drive cameras at up to 28 megapixels.

For audio, the module provides Slimbus and 2x or 3x I2S digital audio connections. There’s no longer any mention of the 3x digital mic connections or the 6x analog in and 6x analog out interfaces. However, the dev kit does offer analog audio I/O. Intrinsyc also lists a sensor interface defined as “SPI, UART, I2C to sensor DSP core.”

The module runs on 3.6V to 4.2V power, and supports extended temperatures of -10 to 70°C. No details were listed for the long lifecycle claims, but the Snapdragon 820E was announced with 10-year support. Software updates are required to achieve the long-term and performance improvements.

The Mini-ITX form-factor, open-frame dev kit for the module appears to be similar to the earlier model. The 170 x 170mm Open-Q 820Pro µSOM Development Kit is equipped with an HDMI port and there’s an optional $150 4K touch panel with a smartphone form factor. 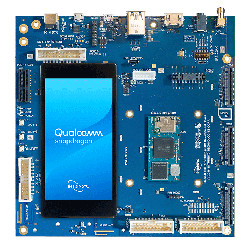 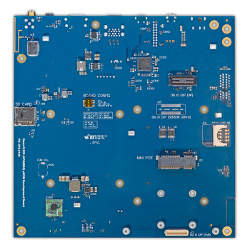 The triple MIPI-CSI interfaces are supported with an optional, 13-megapixel camera for $159. Audio features include a 3.5mm headset jack, a 20-pin header with 3x analog in and 3x digital in, and a 20-in audio output with 5x analog out and 1x digital in.

The dev kit supplies a 12V/3A input but can run on a single-cell Li-ion battery. There’s also a haptic output and LEDs.