Open-Q 660 μSOM, front and back
(click images to enlarge)
Applications for the Open-Q 660 μSOM include on-device artificial intelligence, enhanced gaming, power optimization, device management, security, and advanced photography and image processing jobs such as camera and audio tuning. Intrinysc mentions a development kit that will connect to the module via its 3x 100-pin board to board connectors, but there were no further details.

The 14nm fabricated SoC has 4x Kryo cores clocked to 2.2 GHz and 4x clocked to 1.84 GHz, as well as a 650 MHz Adreno 512 GPU. The module’s AI potentiality is unlocked via dual Spectra 160 ISPs and a Hexagon 680 DSP with Hexagon Vector eXtensions (HVX), which supports Caffe2 and Tensorflow for machine learning and image processing. 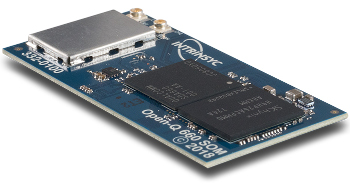 Open-Q 660 μSOM
(click image to enlarge)
The Open-Q 660 μSOM has the same footprint as the Snapdragon 820 based Open-Q 820 µSOM. The module ships with a combo eMCP chip with 32GB eMMC and 4GB of dual-channel, 1866MHz LPDDR4 SDRAM.

The module integrates a 2.4/5GHz 802.11a/b/g/n/ac 2×2 MU-MIMO WiFi radio via a Qualcomm WCN3990 module supported with 5GHz external PA and U.FL antenna connectors. Bluetooth 5.x is also on board.

The Open-Q 660 μSOM is equipped with 2x 4-lane MIPI-DSI interfaces for up to 2560 x 1600 displays plus DP 1.4 for up to 4K@30 or 2K@60. The up to 24-megapixel camera support is derived from 3x 4-lane MIPI-CSI connections with I2C controllers for each camera port plus 2x camera flash control signals.

The Open-Q 660 µSOM is available for pre-order at $225 in single quantities, with shipments due in April. More information may be found in Intrinsyc’s Open-Q 660 µSOM announcement, product page, and shopping page

This article originally appeared on LinuxGizmos.com on March 25.