The NanoCOM-APL is an Apollo Lake upgrade for customers of Aaeon’s similarly COM Express Type 10 Mini form-factor NanoCOM-BT module, which runs on a Bay Trail Atom E3800 SoC. No OS support was listed for the factory automation targeted NanoCOM-APL, but we assume that like the NanoCOM-BT, it runs Linux, as well as Windows. 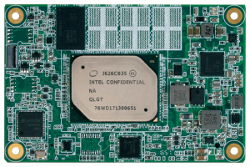 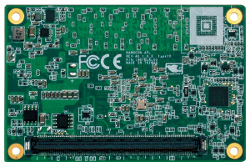 NanoCOM-APL, front and back
(click images to enlarge)
Three Intel Apollo Lake SoCs are available: the quad-core Pentium N4200 and Atom E3950 and the dual-core Celeron N3350. The Pentium and Atom SKUs ship standard with 4 GB LPDDR4, and the Celeron model has 2 GB. Yet, Aaeon also lists a maximum capacity of 8 GB LPDDR4. The only other difference between the SKUs is that the Atom-based model is the only one with 32 GB eMMC 5.0 storage, with an option for up to 64 GB.

The relatively low TDPs of the Atom SoCs compared to other x86 processors enables power consumption of as little as 7 W for the Celeron module, says Aaeon. (The Atom E3950 model runs at up to 12 W.)

The low power consumption enables “hand-held, battery powered devices and fully enclosed IP67 applications,” says Aaeon, One early customer is already using the module combined with an FPGA and an AI chip for a machine vision system that can scan products to “create 3D images that can be checked for faults,” says the company. The vision system be integrated within a production line or a robotic arm. 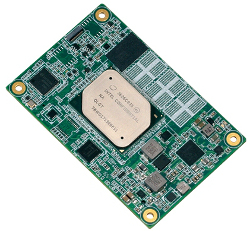 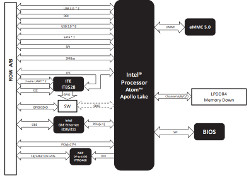 NanoCOM-APL and block diagram
(click images to enlarge)
The NanoCOM-APL module is equipped with an Intel I210IT GbE controller with WoL, and offers dual SATA II interfaces. The Intel HD Graphics Gen9 drives an 18/24-bit single-channel LVDS interface (or optional eDP) plus a DDI connector that supports DDI, LCD/eDP, or LVDS. In the press release, Aaeon promotes the module’s dual MIPI-CSI interfaces. However, there’s no evidence for this on the product page, datasheet, or block diagram.

Like the NanoCOM-BT, the 84 x 55mm module is available in 0 to 60˚C and -40 to 85˚C models. A watchdog is standard, and a heatspreader and CPU cooler are optional. There’s a 12V power input with optional 5V, with both supporting AT and ATX. 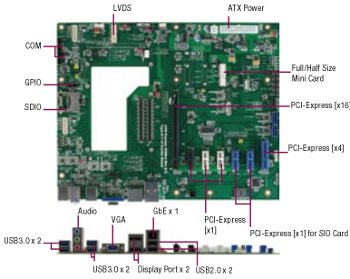