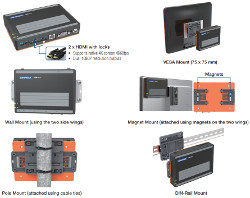 USM-110 (left) and mounting options
(click images to enlarge)
Advantech did not reveal the name of the quad-core, Cortex-A17 SoC, which is clocked to 1.6 GHz and accompanied by a Mali-T764. It sounds very close to the Rockchip RK3288, which is found on SBCs such as the Asus Tinker Board, although that SoC instead has a Mali T760 GPU. Other quad -A17 SoCs include the Zhaoxin ZX-2000 found on VIA Technologies’ ALTA DS 4K signage player.

The USM-110, which is also available in a less feature rich USM-110 Delight model, ships with 2GB DDR3L-1333, as well as a microSD slot. You get 16GB of eMMC on the standard version and 8 GB on the Delight. There’s also a GbE port and an M.2 slot with support for an optional WiFi module with antenna kit.

USM-110 and USM-110 Delight detail views
(click image to enlarge)
The Delight version lacks the 4K-ready HDMI port, as well as the standard model’s mini-PCIe slot, which is available with an optional 4G module with antenna kit. The Delight is also missing the standard version’s RS232/485/422 port, and it has only one USB 2.0 host port instead of four.

Otherwise, the two models are the same, with a micro-USB OTG port, audio jack, reset, dual LEDs, and a 12V/3A DC input. The 0.43 kg system has a 0 to 40°C range, and offers VESA, wall, desktop, pole, magnet, and DIN-rail mounting.

The USM-110 appears to be available now at an undisclosed price. More information may be found in Advantech’s USM-110 announcement and product page.

This article originally appeared on LinuxGizmos.com on September 6.