Summit Wireless, a division of Summit Semiconductor (from Portland, Oregon), supported the Wireless Speaker and Audio (WiSA) Association demonstrations at the CEDIA Expo 2014 in September. During the show, WiSA announced new multi-zone requirements and feature set for simultaneous support of both wireless home theater playback and multi-zone stereo audio streams. WiSA compliant systems should be able deliver high resolution, uncompressed audio, up to 100 m line of sight or 20 to 40 m through walls. 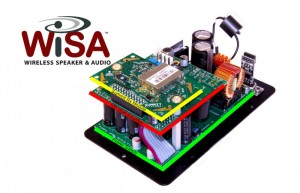 WiSA members recognize the growth of whole house stereo audio solutions in the market place and the practical need to keep system cost down for mass market acceptance. With the new extended distance radio capabilities, a single system will also provide consumers with a WiSA-compliant home theater system and a whole house system.

The new Summit Semiconductor modules can transmit high quality, uncompressed audio up to 100 m line of site. When integrated in an AVR, audio hub, HDTV, Blu-ray player or gaming console, a single transmit module can manage up 32 speakers, and 8 different zones with separate volume control while simultaneously supporting both home theater and multi-zone audio transport. For example, during the CEDIA Expo the WiSA Association demonstrated a wireless 5.1 home theater system with Summit’s extended distance modules that will also simultaneously transmit a separate stereo pair with different content to a separate location.

“We’re excited to offer the new extended distance modules in support of the WiSA Association’s multi-zone and whole house initiative,” says Tony Parker, vice president of marketing, Summit Semiconductor. “This is a perfect tool for audio products that need high resolution multi-channel audio, but want to appeal to a broader base as a multi-media whole house platform. Products such as a HDTV, AVR/Pre-amp, game console, soundbar and HTiB can benefit significantly from adding these modules to their designs.”