According to a new report from the IoT analyst firm Berg Insight, 5G will make its first appearance in the IoT market in late 2020. The first 5G cellular IoT modules will become available to developers this year, enabling early adopters to create the first IoT devices based on the standard. Based on the experience of previous introductions of new standards, 5G will however not be an instant hit. By 2023, Berg Insight forecasts that 5G will account for just under 3 percent of the total installed base of cellular IoT devices. 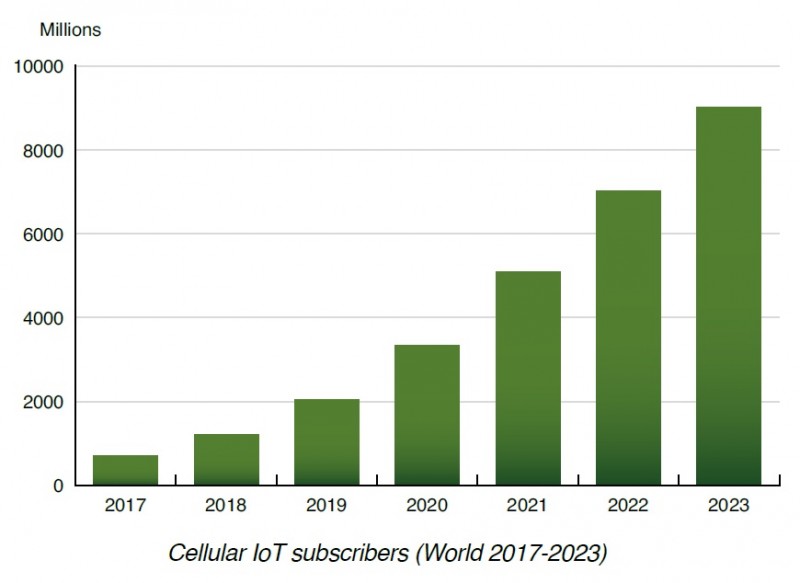 “5G still has some way to go before it can become a mainstream technology for cellular IoT”, says Tobias Ryberg, Principal Analyst and author of the report. “Just like 4G when it was first introduced, the initial version of 5G is mostly about improving network performance and data capacity. This is only relevant for a smaller subset of high-bandwidth cellular IoT applications like connected cars, security cameras and industrial routers.” Ryberg predicts that he real commercial breakthrough won’t happen until the massive machine type communication (mMTC) use case has been implemented in the standard.

mMTC is intended as an evolution of the LTE-M/NB-IoT enhancements to the 4G standard. Since NB-IoT has only just started to appear in commercial products, there is no immediate demand for a successor. Over time, fifth generation mobile networks will however become necessary to cope with the expected exponential growth of IoT connections and data traffic. The report identifies homeland security as an area where 5G cellular IoT can have a major impact already in the early 2020s. “5G enables the deployment of high-density networks of AI-supported security cameras to monitor anything form security-classified facilities to national borders or entire cities”, says Mr. Ryberg. “How this technology is used and by whom is likely to become one of the most controversial issues in the next decade.”

Study Predicts 5G Will Reach the IoT Market in Late 2020

Product News Adapter Enables Offline Speech Board to Work with …