SeeedStudio has built an SoM based on STMicroelectronics’ Arm Cortex A7/M4 hybrid SoC called the SOM-STM32MP157C, along with a Raspberry Pi “inspired” baseboard called the NPi-STM32MP157C. Together these products form a new SBC designated Odyssey-STM32MP157C. Although product details for the SBC yet to appear for on Seeed’s website at the time of this writing, specs and documentation are available on Seeed’s GitHub pages as well as distributor sites Digi-Key and Mouser. The SBC is targeted for applications such as consumer,industrial, white goods, medical and wearable devices. 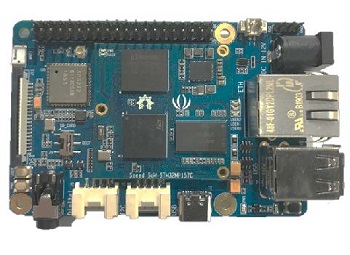 This appears to be Seeed’s first board based on the STM32MP1. STMicroelectronics’ 650MHz dual-core, Cortex-A7 STM32MP1 SoC includes a tightly integrated, 209MHz Cortex-M4 MCU with FPU, MPU, and DSP instructions. The Odyssey uses the top-of-the-line version of the SoC, the STM32MP157C, which adds hardware encryption and secure boot. From the copious Linux and Windows setup instructions in the Github documentation, it’s clear that the Odyssey runs Linux and Windows XP/7/8, but OS support is not explicitly listed.

Other boards we’ve seen sporting the STM32MP1 include i2SOM’s PanGu SBC, as well as the Avenger96, a sandwich-style 96Boards CE Extended SBC from Arrow and the SOM-STM32MP157 module from Kontron. Meanwhile, ST offers its own, open-spec STM32MP157A-DK1 and -DK2 boards selling for $69 and $99, respectively, which are included in our recently updated hacker board catalog. 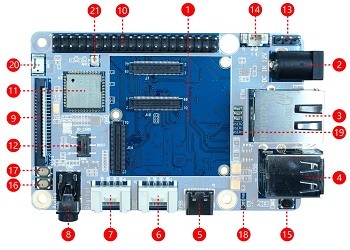 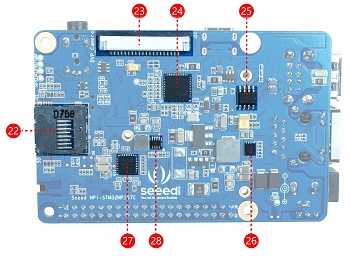 Specifications listed for the NPi-STM32MP157C include:

The SOM-STM32MP157C is similar to other modules we’ve seen based on ST’s STM32MP157 device. Like Kontron’s almost identically named SOM-STM32MP157, this module sports the high-end -C version of the SoC. Like the Kontron SoM, the Seeed product has 512MB of DDR3 RAM, but has a 4GB flash eMMC on board that the Kontron SoM lacks. That said, the Seeed 38x38mm SoM is larger than Kontron’s tiny 25.4 x 25.4mm form factor. 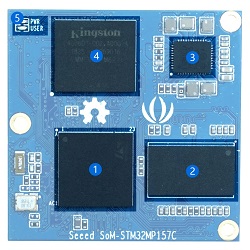 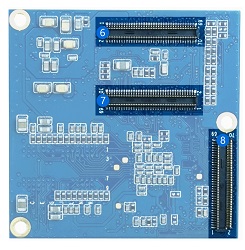 Specifications listed for the SOM-STM32MP157C include:
(numbers in brackets correspond to locations on images above)

Quite a bit of detailed information is available on SeeedStudio’s NPi-STM32MP157C and SOM-STM32MP157C GitHub pages, including code samples with an Arduino sketch running on their Seeeduino V4 board connected to a CAN Bus shield. There’s also a Python script running Qt on the SBC. The CNX Software story that alerted us to this story points out that the documentation is available in both Chinese and English versions, and you should click on the “EN” files for the English versions.

The ODYSSEY-STM32MP157C SBC is not available as of now on SeeedStudio’s shopping pages, but Digi-Key and Mouser have the SOM-STM32MP157C listed for $27, and the SoM and baseboard combined for $58. As the CNX Software story says, the “Odyssey” product name seems to be only used on the GitHub page. Digi-Key and Mouser instead refer to the SBC by the basedboard’s name: NPi-STM32MP157C.

This article originally appeared on LinuxGizmos.com on January 22, 2020.