Microstar Laboratories has released DAPtools for Python software, an API that enables high-performance data acquisition applications using the Python programming language on desktop GNU/Linux systems. This is not a reduced or specialized language variant—it supports the complete, full-featured Python environment and complements the Accel64 for Linux software that provides access to DAP board features and functions. Typical applications are one-time diagnostic tests, academic research, and automatically-configurable scripting for test automation. 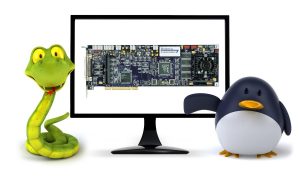 The DAPIO programming interface behind DAPtools for Python provides the same stable DAPL system services that all other high-level programming environments have used over the last 20 years. Access to that interface is through a Linux dynamic library, which Python applications can load and access using the ctypes library. DAPtools for Python presents the low-level interface as a simple “interface object” and some utility functions to make the DAP board interactions work like familiar Python objects and functions. The programming is a lot like connecting to a networked resource: open a connection, specify the data acquisition actions required, run the configuration, take the requested data, and close the connection when finished.