While covering Advantech’s newly announced, i.MX8M based ROM-5720 SMARC 2.0 module and i.MX8 QuadMax based ROM-7720 Qseven module, we noticed a product page for an i.MX8X-based ROM-5620 SMARC 2.0 module marked as “new.” Presumably, the module is similarly available with three months of free Timesys’ Vigiles security service, which Advantech said would be available to all its customers for NXP’s i.MX8 family. The module is available with open source Linux and Android BSPs, which include test utilities, hardware design utilities, and reference drivers. 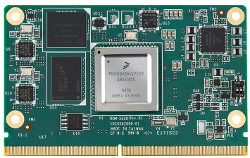 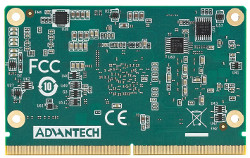 The ROM-5620 supports the dual-core DualXPlus and quad-core QuadXPLus models of the i.MX8X, with the power-efficient Cortex-A35 cores clocked to 1.2GHz. The SoC also offers a 4-shader Vivante GC7000 Lite GPU with support for OpenGL 3.0/2.1, OpenGL ES 3.1/3.0/2.0/1.1, and OpenCL 2.0 accelerators. There’s also a Cortex-M4F MCU core and a Tensilica HiFi 4 DSP that supports voice-control applications. 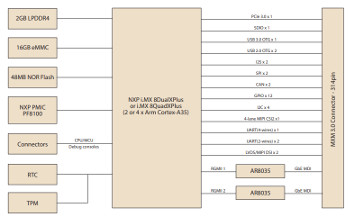 The ROM-5620 supports 4K@30 decode via its pair of 4-lane MIPI-DSI interfaces. Alternatively, you can swap these out for a pair of single-channel LVDS interfaces that top out at 1080p. You also get a 4-lane MIPI-CSI camera interface and 2x I2S for audio.

The module has a fixed 5V DC input as well as 3.3V to 5.25V input from Lithium Ion batteries. Other features include a PMIC, watchdog timer, RTC, and TPM 2.0 security chip.

The ROM-5620 is available in 0 to 60°C or -40 to 85°C models with 5~95% relative humidity, non-condensing support. Options include a heatspreader, semi heatsink, debug adapter and cable, and power cords and adapters.

No pricing or availability information was provided for the ROM-5620. More information may be found on Advantech’s ROM-5620 product page.

This article originally appeared on LinuxGizmos.com on November 7, 2019.