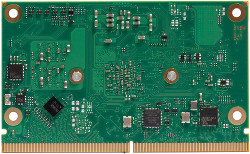 Congatec touts the module for its MIPI-CSI-2 interface and support for an upcoming SMARC MIPI-CSI-2 starter kit to be released in cooperation with industrial camera manufacturer Basler. No more details were available about this “highly integrated embedded vision platform” that support the “development of cost-efficient vision devices for sparse modeling based AI.” Congatec offers a similar Conga-CAM-KIT/MIPI kit for its Intel Apollo Lake based Conga-PA5 Pico-ITX SBC that uses a Leopard Imaging sensor instead of a Basler camera.

Congatec did not mention support for standard carrier boards such as the Conga-SEVAL SMARC 2.0 carrier supported by the Conga-SMX8. Congatec did, however, announce a new Conga-STX7 carrier board and new cooling solutions for its recently released AMD Epyc Embedded 3000 based conga-B7E3 module. The combined offerings are billed as a “100 Watt ecosystem.” (See farther below.)

The 82 x 50mm Conga-SMX8-Mini offers Linux, Yocto Linux, or Android BSPs with “ready-to-go boot loader implementation” for the single, dual, and quad-core versions of the i.MX8M Mini. The Cortex-A53 cores are clocked at 1.8GHz on the standard 0 to 60°C models and 1.6GHz for the industrial -40 to 85°C SKUs.

NXP’s i.MX8M Mini uses a more advanced 14LPC FinFET process than the more expensive i.MX8M, resulting in lower power consumption and higher clock rate for the -A53 cores and 400MHz Cortex-M4 MCU. NXP’s first embedded heterogeneous multi-core SoC has lower-powered GCNanoUltra (3D) and GC320 (2D) graphics cores with video acceleration that tops out at 1080p60 instead of 4K. The Mini also provides a slate of security features from secure boot to crypto. 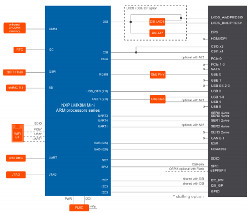 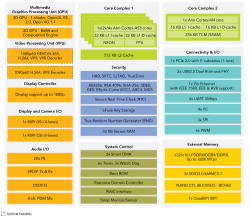 You can load up to 4GB LPDDR4 (3200 MT/s) and up to 128GB eMMC 5.1 on the Conga-SMX8-Mini, which also offers a GbE controller and an optional WiFi/Bluetooth M.2 card. The module defaults to dual-channel, 24bit LVDS, or you can alternatively use an optional eDP or 4-lane MIPI-DSI interface. There are also dual I2S interfaces for digital audio.

The Conga-SMX8-Mini supports up to 5x USB 2.0 interfaces, one of which can be an OTG port. Other I/O includes 3x UART, multiple GPIOs, and single PCIe 2.0, SDIO 3.0, I2C, and SPI connections. There’s also a watchdog, JTAG debug, and an optional RTC. The module ships with up to 15 years lifecycle support.

This week Congatec announced a “100 Watt ecosystem” for its COM Express Type 7 modules that support 65 to 100W TDP processors. The product line initially targets its Conga-B7E3 Basic Type 7 “server-on-module,” which runs Linux or Windows on AMD’s up to 16-core Epyc Embedded 3000, available in up to 100W TDPs.

Until now, Congatec’s cooling solutions were limited to modules with processors that have 65W or lower TDPs. Its 100 Watt ecosystem of new heat spreaders and heatpipe adapters extends that to provide “efficient heatpipe cooling even of extremely low profile 1U servers” running up to 100W processors, says Congatec. “This enables an impressive performance boost of 53% for rugged fanless COM Express Type 7 designs,” stated Nano Chu, R&D Manager at Congatec’s Taipei office.

The 100 Watt ecosystem also includes a new Conga-STX7 carrier that joins the larger Conga-X7EVAL Type 7 carrier. We saw no further details on the Conga-STX7, which similarly supports four 10GbE interfaces, “which are server-compatible with SFP+ cages for both copper and fiber optic cables,” says Congatec.

The first 100W ecosystem photo above shows the Conga-STX7 carrier, the Conga-B7E3 module, and a fan-equipped Conga-B7E3 cooling solution. The image below also shows a heatspreader and an unidentified add-on board. 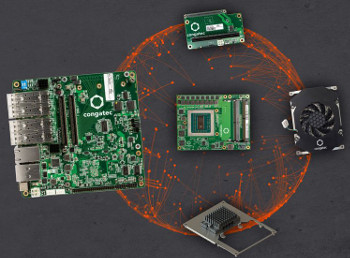 Another view of the 100 Watt ecosystem
(click image to enlarge)

The Conga-B7E3 was announced in March and appears to have begun shipping. The module offers up to 96GB DDR4, 4x 10GbE ports, 32x PCIe lanes, and an optional 1TB NVMe disk.

Congatec currently offers only two other Type 7 modules, neither of which supports processors with more than 65W TDPs. One is the Conga-B7AC with a 16-core Intel Atom C3000 that tops out at 31W TDP. There’s also a Xeon-based Conga-B7XD that does not exceed 45W. Congatec may be planning on future Eypc Embedded 3000 modules or modules based on Intel’s 75W TDP Xeon E5 or new 2nd Gen Xeon Scalable processors.

More information on the 100W ecosystem for the Conga-B7E3 may be found in Congatec’s 100W announcement and product page.

This article originally appeared on LinuxGizmos.com on September 17.