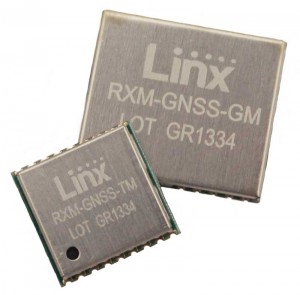 The 10-mm × 10-mm receivers are capable of better than 2.5-m position accuracy. Hybrid ephemeris prediction can be used to achieve less than 15-s cold start times. The receiver can operate down to 3 V and has a 20-mA low tracking current. To save power, the TM Series GNSS modules have built-in receiver duty cycling that can be configured to periodically turn off. This feature, combined with the module’s low power consumption, helps maximize battery life in battery-powered systems.

The receiver modules are easy to integrate, since they don’t require software setup or configuration to power up and output position data. The TM Series GNSS receivers use a standard UART serial interface to send and receive NMEA messages in ASCII format. A serial command set can be used to configure optional features. Using a USB or RS-232 converter chip, the modules’ UART can be directly connected to a microcontroller or a PC’s UART.

The GPS Master Development System connects a TM Series Evaluation Module to a prototyping board with a color display that shows coordinates, a speedometer, and a compass for mobile evaluation. A USB interface enables simple viewing of satellite data and Internet mapping and custom software application development.
Contact Linx Technologies for pricing.