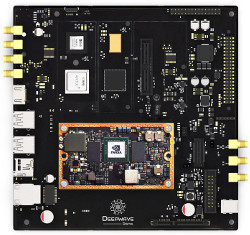 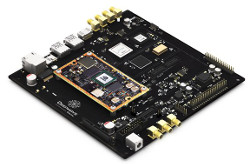 AIR-T with Jetson TX2 module
(click images to enlarge)
The AIR-T is available through Aug. 14 for $4,995 on Crowd Supply with shipments due at the end of November. Deepwave Digital has passed the halfway point to its $20K goal, but it’s already committed to building the boards regardless of the outcome.

The AIR-T is designed for researchers who want to apply the deep learning powers of the Jetson TX2’s 256-core Pascal GPU and its CUDA libraries to the SDR capabilities provided by the Artix 7 and AD9371 transceiver. The platform can function as a “highly parallel SDR, data recorder, or inference engine for deep learning algorithms,” and provides for “fully autonomous SDR by giving the AI engine complete control over the hardware,” says Deepwave Digital. Resulting SDR applications can process bandwidths greater than 200MHz in real-time, claims the company.

The software platform is built around “custom and open” Ubuntu 16.04 software running on the Jetson TX2, as well as custom FPGA blocks that interface with the open source GNU Radio SDR development platform.

The combined stack enables developers to avoid coding CUDA or VHDL. You can prototype in GNU Radio, and then optionally port it to Python or C++. More advanced users can program the Artix 7 FPGA and Pascal GPU directly. AIR-T is described as an “open platform,” but this would appear to refer to the software rather than hardware.

Other applications include video, image, and audio recognition. You can “demodulate a signal and apply deep learning to the resulting image, video, or audio data in one integrated platform,” says the company. The product can also be used for electrical engineering or applied physics research.

The AIR-T is further equipped with a SATA port and a microSD slot loaded with the Ubuntu stack, as well as GbE, USB 3.0, USB 2.0 and 4K-ready HDMI ports. You also get DIO, an external LO input, a PPS and 10 MHz reference input, and a power supply. It typically runs on 22 W, or as little as 14 W with reduced GPU usage. Other features include 4x MCX-to-SMA cables and an optional enclosure.

The Artificial Intelligence Radio – Transceiver (AIR-T) is available through Aug. 14 for $4,995 on Crowd Supply — at a 10 percent discount from retail — with shipments due at the end of November. More information may be found on the AIR-T Crowd Supply page and the Deepwave Digital website.

This article originally appeared on LinuxGizmos.com on July 18..