Boardcon has produced a lot of Samsung and Rockchip based embedded boards, such as its recent, Rockchip RK3399 based CM3399 module and Idea3399 SBC, but the EM-IMX8M-MINI SBC and its SOM-IMX8M-MINI module are its first i.MX8 family boards. The i.MX8M Mini based EM-IMX8M-MINI, which like the Idea3399 is a sandwich-style, COM-and-carrier product, follows earlier NXP-based SBCs that we missed including the i.MX7-based EINK-IMX7 and i.MX6 UL powered EM6ul. We did cover its earlier i.MX287-based MINI287 module. 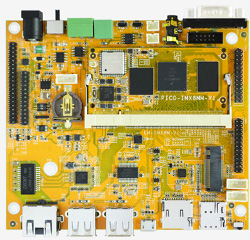 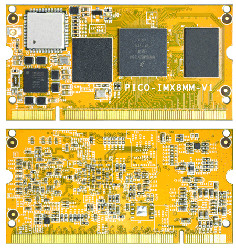 NXP’s i.MX8M Mini system-on-chip, which is built into the separately available, SODIMM-style SOM-IMX8M-MINI module that powers the EM-IMX8M-MINI SBC, has appeared on numerous compute modules, many of which like Ibase’s recent RM-N8MMI SMARC module, are available with a carrier board. There are fewer Mini-based SBCs, such as Seco’s SBC-C61 and Boundary Devices’ Nitrogen8M_Mini.

While the SOM-IMX8M-MINI module appears to be available with any of the 1.8GHz Cortex-A53 i.MX8M Mini models, the EM-IMX8M-MINI board is sold only with the quad-core model. The Mini SoC also provides a 400MHz Cortex-M4 MCU as well as GCNanoUltra and Vivante GC320 graphics processors. Despite the 4K claims in the Embedded Computing Design story that alerted us to the products, the Mini SoC and the SOM-IMX8M-MINI are limited to HD resolution. 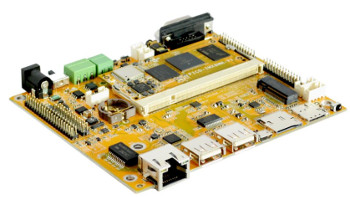 The 118.6 x 102.3mm EM-IMX8M-MINI board adds a microSD slot, MIPI-DSI and -CSI connectors, and analog and digital audio interfaces, including a Wolfson codec. There are 2x USB host ports and single micro-USB OTG, GbE, and RS-232 ports. 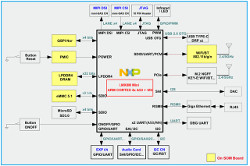 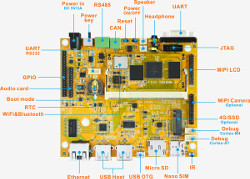 The EM-IMX8M-MINI is further equipped with interfaces including UART, RS485, CAN, I2C, GPIO, SPI, and JTAG. An M.2 slot supports an optional 4G module or SSD, and a nano-SIM slot is available. No operating range was listed.

Specifications listed for the EM-IMX8M-MINI include:

This article originally appeared on LinuxGizmos.com on November 15, 2019.