The Ryzen Embedded R1000 offers the same Zen CPU and Vega GPU cores as the V1000 while providing “3x generational performance improvement per watt” compared to the R-Series Merlin Falcon. The Linux-friendly chips are hardware and software compatible with the V1000.

The R1000 is designed for fanless embedded systems in applications including digital displays, high-performance edge computing, networking, and thin clients. Early adopters include Atari, which is using it for its VCS console, and Ibase, which announced an SBC and signage player (see farther below).

Security features are the same as those on the V1000, including an AMD Secure Processor “that encrypts data before it feeds to the I/O” and Platform Secure Boot capabilities, says AMD. One-time programmable (OTP) capabilities enable system designers to manage their own keys. 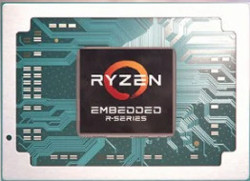 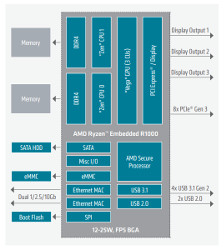 Like Intel’s latest 8th Gen, low-power Whiskey Lake-U CPUs, the chips support USB 3.1 Gen2 for up to 10Gbps throughput. Like the V1000, the R1000 SoC can drive up to 4x USB 3.1 ports as well as a USB Type-C port with DP support. PCIe support tops out at 8x lanes rather than 16x on the V1000. Other I/O support is mostly the same, including dual SATA and NVMe support.

The AMD Ryzen Embedded R1000 will be available to ODMs and OEMs worldwide later in this current second quarter. More information may be found in AMD’s R1000 announcement and product page.