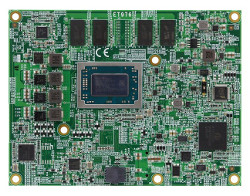 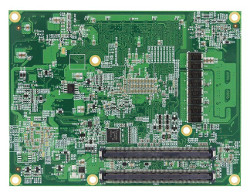 Ibase listed no OS support for the ET976, but all the other V1000-based modules either ship with Linux as the default or support Linux and Windows. The module supports the dual-core V1202B and the quad-core V1605B, V1807B, and V1807B SoCs at up to 3.8GHz. Applications include graphics-intensive devices used in industrial automation, medical imaging, transportation, gaming, payment systems, and ATM machines.

Claimed to be up to twice as fast as AMD’s earlier R-Series SoCs, the Ryzen Embedded V1000 competes with Intel’s similarly 14nm-fabricated Kaby Lake and Coffee Lake Core processors. The SoC offers up to four dual-threaded Zen CPU cores for 8x threads total, as well as high-end Radeon Vega 3 graphics with up to 11 compute units. 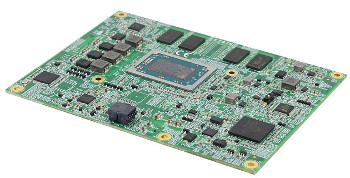 The ET976 supports up to 8GB of DDR4, including ECC RAM. It integrates an Intel I210IT GbE controller a watchdog, hardware monitoring functionality, and support for TPM 2.0.

The announcement mentions triple independent displays, but the product page says there are only dual displays. In any case, they are enabled with 2x DDI and either an LVDS or optional eDP interface. No resolution was mentioned, but some of the other modules support 4K video.

No pricing or availability information was provided for the ET976. More information may be found in Ibase’s ET976 announcement and product page.

This article originally appeared on LinuxGizmos.com on July 16.