Versalogic announced a Linux-friendly SBC due in 1Q 2020 that continues its line of rugged, double-board Embedded Processing Unit (EPU) products built around Intel’s Apollo Lake Atom SoCs. The Owl will come out around the same time as the recently announced, avionics oriented Harrier, which followed a similar Osprey boardset from 2016.

The larger Owl has twice the number of serial ports than those boards and adds analog inputs. It also has a wider 8-30V DC input and offers dual full-size mini-PCIe slots instead of full- and half-size. 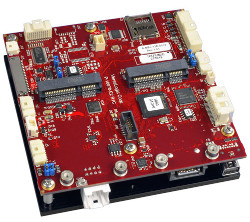 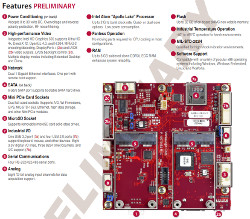 While the Harriet and Osprey measure 95 x 55 x 27mm, the Owl expands to 95 x 95 x 27mm. Like these earlier models, there are no fully configured ports, helping to reduce weight (200 grams) and vertical profile, which is already considerable due to the double-board design. This makes it easier to use the boards for deployment in constrained applications including “unmanned vehicles on land, underwater, or in the air,” says Versalogic. A wide variety of optional cables and adapters help to ease prototyping.

The Owl has 10-year lifecycle support and is designed and tested for -40 to 85ºC operation. It meets MIL-STD-202H specifications for shock (20g half-sine) and vibration (5.35 grms, random). A heat plate is standard, and accessories include a heatsink, fan, and heat pipe.
The 8-30V Owl offers ACPI 3.0 power management and voltage protections. There’s also an RTC with battery support, a TPM 2.0 security chip, and system reset and HW monitoring.

The dual full-size mini-PCIe slots include one with mSATA, PCIe, and USB support and another with PCIe and USB. Vesalogic offers a dozen mini-PCIe modules to choose from, including Ethernet, fiber, FireWire, GPIO, analog input, GPS, display, and mSATA.
The Owl supports Linux, Windows, Windows Embedded, and VxWorks. Versalogic provides its VersaAPI library for reading and controlling onboard devices with Visual Studio and C/C++ support

Further information
The Owl will be available in production volumes in Q1 2020 at an undisclosed price. You may be able to nab a limited supply of evaluation units before that. More information may be found in Versalogic’s Owl announcement and product page.

This article originally appeared on LinuxGizmos.com on December 5, 2019.