Novasom’s new M7+ version of its Pi-like, RK3328 based SBC-M7 board adds RS485, power over USB, an FPC connector for HDMI, and a library that lets Pi users recompile Raspbian apps for use with its industrial RASPMOOD stack.

In February, Novasom Industries launched its Linux-powered, Rockchip RK3328 based SBC-M7 single board computer, which Novasom now calls the Novasom M7, along with an SBC-M8 board based on a Snapdragon 410E. Now, Novasom has followed customer feedback to upgrade the somewhat Raspberry Pi-like Novasom M7 with a Novasom M7+ (or M7Plus) model that provides a variety of hardware and software improvements. 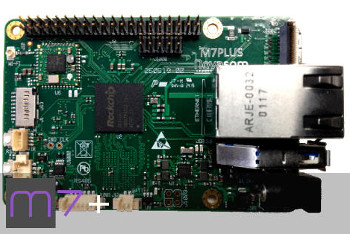 The Novasom M7+ has added 5V power input support to its USB 3.0 host port, although you can still use the 12V DC input instead. Novasom has also added a stronger backlight driver and has upscaled to 6A (@5V) backlight support for a brighter connected display.

The Novasom M7+ has added USB outputs to the J3 connector and has added a new RS485 serial interface. A new FPC cable connector for the HDMI port is said to make it easier to integrate with other equipment such as Novasom’s optional, fully assembled NovaPC configurations of its SBCs with displays and other accessories.

On the software side, Novasom’s RASPMOOD industrial spin of Raspbian, which ships free to its SBC customers, now offers a library that lets users run Raspbian applications directly on RASPMOOD by letting them recompile it on Novasom’s custom Linux kernel and library. “Instead of compiling your application software with the Raspberry-GPIO library on Raspbian, you compile it with the Novasom Industries RASPMOOD-GPIO library on Armbian,” says the company. Since our original report, Novasom has also added a Yocto Poky Rocko image for the M7 boards.

Otherwise, the Novasom M7+ appears to be identical to the M7. It has an RPi-like footprint and 40-pin GPIO, but switches to the 1.5GHz, quad-core, Cortex-A53 Rockchip RK3328 with a Mali-450 MP4 GPU. The RK3328 also powers the Rock64, Tinker Board S, and Radxa’s new Rock Pi E, among other Linux hacker boards. 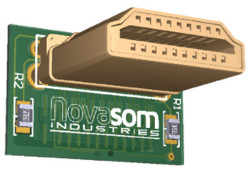 Like the Novasom M7, the M7+ can be configured with various extension boards called “Piggy” boards. There are also different model configurations based on other features. For example, the SBC-M7+FT model adds 16GB eMMC, and the M7+A model lacks the onboard WiFi/Bluetooth module found on the other boards. The M7+FT and MT+D ship with 2GB of DDR3 RAM instead of 1GB.

All the Novasom M7+ models provide a microSD slot and the 4K-ready HDMI port with capacitive touch support. You also get a 10/100 Ethernet port, parallel camera interface, audio output, and a micro-USB debug port in addition to the USB 3.0 host.

The industrial-focused SBC has a wide-range 6.5-18VDC input, a battery-backed RTC, an LED, and a reset button. There’s also an extended 0 to 70⁰C operating range. 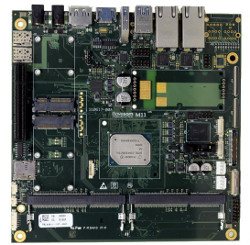 It is unclear if the Intel Apollo Lake based Novasom M11 model that Novasom planned to ship in the second quarter is now available. Since our February report, Novasom has posted a photo for an M11FT model.

The M11 ships with up to 8GB RAM and offers eMMC, microSD, and SATA storage. Media features include HDMI, DP, LVDS, and MIPI-DSI and -CSI. You also get 2x GbE, WiFi/BT, 3x USB 3.0, 2x USB 2.0, mini-PCIe, and 4-lane, full-size PCIe among other features. The Linux- and Windows-ready SBC provides extended and industrial temperature support.

Novasom also sells an N-line of SBCs based on the NXP QorIQ Layerscape LS1012, as well as i.MX6-based P- and S-Line models and i.MX6 ULL based U-line boards. All these boards run Linux, but there’s also a U1 model that runs an RTOS on an ESP32. More information on all these boards may be found in our previous Novasom report.