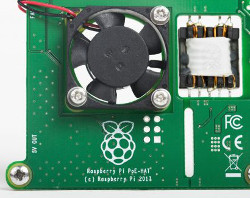 Raspberry Pi PoE HAT alone (left) and fitted on Raspberry Pi 3 Model B+
(click images to enlarge)
We’ve seen an increase in the use of PoE in embedded equipment over the last year, perhaps due to the growth in IoT applications in which embedded gear must be placed in remote locations. It’s cheaper and easier to run Ethernet cable to a remote device than to extend electrical lines.

With the help of the RPi 3 B+’s improved PXE boot function, which enables network booting, “you can now dispense with not only the power supply but also the SD Card, making deployment even cheaper for a Raspberry Pi based system in your factory or workplace,” writes Roger Thornton in the Raspberry Pi blog announcement.

The Raspberry Pi PoE HAT features a fully isolated switched-mode power supply with 37-57V DC, Class 2 input and 5V/2.5A DC output. The HAT connects to both the 40-pin header and a new PoE-specific 4-pin header introduced with the B+ located near the USB ports. To enable PoE, you need power sourcing equipment, which is either “provided by your network switch or with power injectors on an Ethernet cable,” writes Thornton. 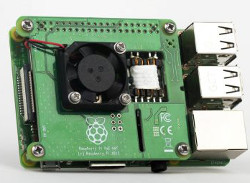 Raspberry Pi PoE HAT with RPi 3 B+ (left) and close-up of 4-pin header on B+ between the USB ports and the 40-pin GPIO header
(click images to enlarge)
The PoE HAT ships with a 25 x 25mm brushless fan for cooling the Broadcom SoC. This does not appear to be due to any additional heat generated by PoE. Instead: “We see the product as a useful component for people building systems that may be in tougher environments,” writes Thornton.

The fan is connected via I2C and controlled with an Atmel MCU chip. This setup turns on the fan automatically when the SBC hits a certain temperature threshold, a trick that requires the latest sudo rpi-update firmware.

You can add another HAT board on top of the fan with the help of some pass-through headers for the 40-pin GPIO and the 4-way header to expose the pins on the other side of the PoE HAT. Raspberry Pi Trading recommends the 2×20 pin header from Pimoroni and 4-way risers from RS and element14.

The Raspberry Pi 3 Model B+ won LinuxGizmos’ reader survey of 116 Linux/Android hacker boards. The community-backed SBC builds upon the RPi 3 Model B design with a faster, up to 1.4GHz quad-core Broadcom SoC, as well as faster Ethernet (GbE). You also get various power management improvements and faster dual-band 802.11ac and Bluetooth 4.2, which comes in a pre-certified, shielded module.

The Raspberry Pi PoE HAT is available now for $20 at a variety of resellers. The blog announcement may be found here. The product page with links to resellers is here.

This article originally appeared on LinuxGizmos.com on August 25.