We knew it was only a matter of time before we covered a board from Luxembourg, and that time has come. Rodange, Luxembourg based Upsilon Engineering, which is led by embedded engineer Yann Leidwanger, has gone to Kickstarter to launch its BioControle add-on board for the Raspberry Pi 3. The board can be used as a general purpose I/O and DAQ add-on but is specifically designed as a control board for aquaponics and hydroponics gardening. 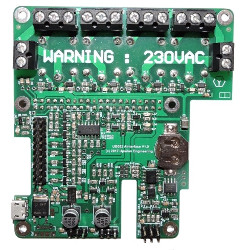 BioControle prototype with Raspberry Pi 3 (left) and bare PCB on its own
(click images to enlarge)
The BioControle, which we spotted on Geeky Gadgets is available for 76 Euros ($89) through Oct. 17. Assuming Upsilon can raise another $7,000, shipments are expected in November. 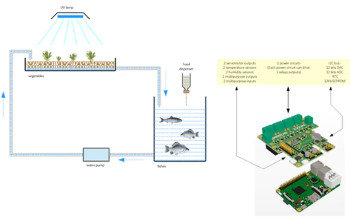 BioControle controlling aquaponics system
(click image to enlarge)
The BioControle is a more general purpose offering than the recent Autogrow OpenMinder root zone monitor HAT for the Raspberry Pi, which includes software that helps manage water, pH, and nutrient usage in hydroponic farming. The proof of concept was developed for an aquaponics project at the Thilab FabLab based in Thionville, France. Leidwanger then built a prototype with additional features that also supports hydroponics and other projects that need a mix of servos, sensors, relays, and I/Os.

BioControle detail views
(click images to enlarge)
Specifications listed for the BioControle include:

All interfaces are said to be protected against reverse polarity, undervoltage, and overvoltage. It also offers “full protection between your application and your Raspberry Pi” with the help of buffers, level shifters, protection diodes, and serial protection resistance,” says Upsilon. The board provides 5 V and 3.3 V power supply supervisors “connected on LED and Raspberry Pi input,” and can run on a standard 230VAC adapter.

The design includes a cutout that enables easy access to the Raspberry Pi 3’s MIPI-CSI and DSI headers. The open source BioControle is available with schematics, pinout, and Python example codes

The prototype has been thoroughly bug-tested, but Upsilon needs funding to build a v2.0 model that improves the servomotor headers, which are designed to dispense fish food on aquaponics systems. It also removes a second power supply header and several capacitors.

The BioControle is available on Kickstarter for 76 Euros ($89) through Oct. 17. Volume discounts are available, and assuming the project is funded, shipments are expected in November. More information may be found on the BioControle Kickstarter page and the Upsilon Engineering website.

This article originally appeared on LinuxGizmos.com on September 18.