Adafruit has released a $35 robotics HAT add-on for any 40-pin Raspberry Pi board. The Adafruit Crickit (Creative Robotics & Interactive Construction Kit) HAT is designed for controlling motors, servos, or solenoids using Python 3. The board is limiting to powering 5V devices and requires a 5 V power supply. 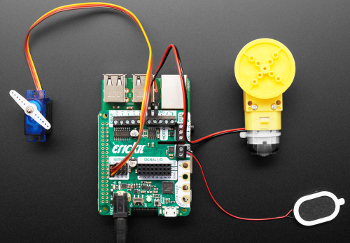 Adafruit Crickit HAT with Pi and connected peripherals
(click image to enlarge)
The Crickit HAT incorporates Adafruit’s “i2c-to-whatever” bridge firmware, called seesaw. With seesaw, “you only need to use two data pins to control the huge number of inputs and outputs on the Crickit,” explains Adafruit founder and MIT engineer Limor Fried in an announcement on the Raspberry Pi blog. “All those timers, PWMs, NeoPixels, sensors are offloaded to the co-processor. Stuff like managing the speed of motors via PWM is also done with the co-processor, so you’ll get smooth PWM outputs that don’t jitter when Linux gets busy with other stuff.” 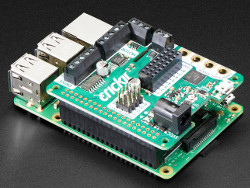 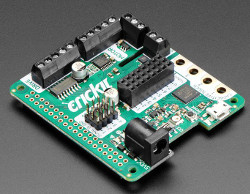 Crickit HAT with and without Raspberry Pi
(click images to enlarge)
The Crickit HAT uses a “bento box” approach to robotics, writes Fried. “Instead of having eight servo drivers, or four 10A motor controllers, or five stepper drivers, it has just a little bit of everything,” she adds.

Specifications listed for the Adafruit Crickit HAT include: 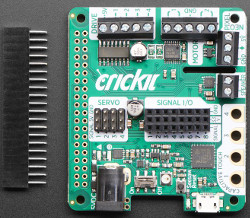 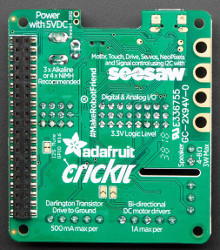 The Adafruit Crickit HAT is currently listed as “out of stock” at $34.95. More information may be found in Adafruit’s Crickit HAT announcement and product page.

This article originally appeared on LinuxGizmos.com on December 18..