We’ve seen a variety of embedded systems based on the Raspberry Pi Compute Module 3, including IoT gateways such as CompuLab’s IOT-GATE-RPi and automation controllers like Techbase’s ModBerry or Brainboxes’ BB-400 NeuronEdge Controller, which is based on the wider temp, up to 32GB eMMC RPi CM3+. CM3-based development boards include Gumstix’s Alexa Voice Service, Kontron’s Passepartout, and balena’s balenaFin. among others. Waveshare‘s new Compute Module PoE Board joins this second group with a low $38 price and Power-over-Ethernet. 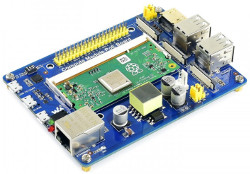 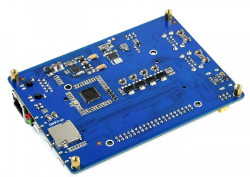 Although you can get a faster board with more features and less money with a Raspberry Pi 4 with a PoE HAT, Waveshare’s product is designed primarily for evaluating the CM3 or prototyping custom systems built around the CM3. (It can also be used for final products, says Waveshare.) The $38 price does not include the cost of the $25 to $30 CM3 or CM3+ module. There’s also an enclosed, $50 version of the PoE Board called the CM-IO-POE-BOX that also ships without the CM3/CM3+ (see farther below).

As noted by the CNXSoft story that alerted us to the product, the Compute Module PoE Board follows Waveshare’s $47 Compute Module IO Board Plus. This larger board offers features not found here, including 1-wire, ADC, DAC, RTC, IR, a sensor interface, and an Arduino header. However, it has no LAN port, let alone PoE. Waveshare has made other Raspberry Pi related products such as the RPi Camera G and Raspberry Pi 10.1 inch touchscreen, and this year it extended the Jetson Nano module with a JetBot AI Kit for robotics.

The 114 x 84.4mm Compute Module PoE Board builds on the CM3 or CM3+ modules, which offer quad-core Cortex-A53 Broadcom SoCs clocked to 1.2GHz with 400MHz VideoCore IV GPUs. There’s also 1GB of LPDDR2 RAM and either 4GB (CM3) or 8GB to 32GB eMMC (CM3+). The board also supports the Lite version of either model, which lacks eMMC storage. 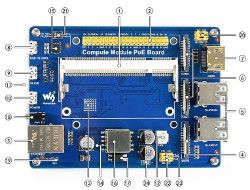 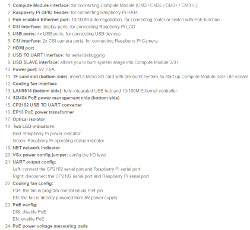 The Compute Module PoE Board is further equipped with 4x USB 2.0 host ports and 3x micro-USB ports. One is for power input, another for UART debug, and the third client/slave interface supports burning of system images.

Media interfaces include an HDMI port, a MIPI-DSI interface, and dual MIPI-CSI camera inputs. Other features include a microSD slot, dual LEDs, a fan interface, and a 40-pin GPIO connector. This is an open-spec board, with posted schematics and open source code for fan and camera interfaces.

The CM-IO-POE-BOX model adds a metal case, a power supply, and a cooling fan that can be controlled by software via GPIO. Cutouts are provided for all peripherals. With the mounting hole extensions, the dimensions are 144 x 88 x 30mm.

This article originally appeared on LinuxGizmos.com on December 14, 2019.