A new microcontroller that combines specified radiation performance with low-cost development associated with Commercial Off-The-Shelf (COTS) devices is now available from Microchip Technology. Developing radiation-hardened systems for space applications has a history of long lead times and high costs to achieve the highest level of reliability for multi-year missions in a harsh environment. Today, space and other critical aerospace applications require faster development and reduced costs. 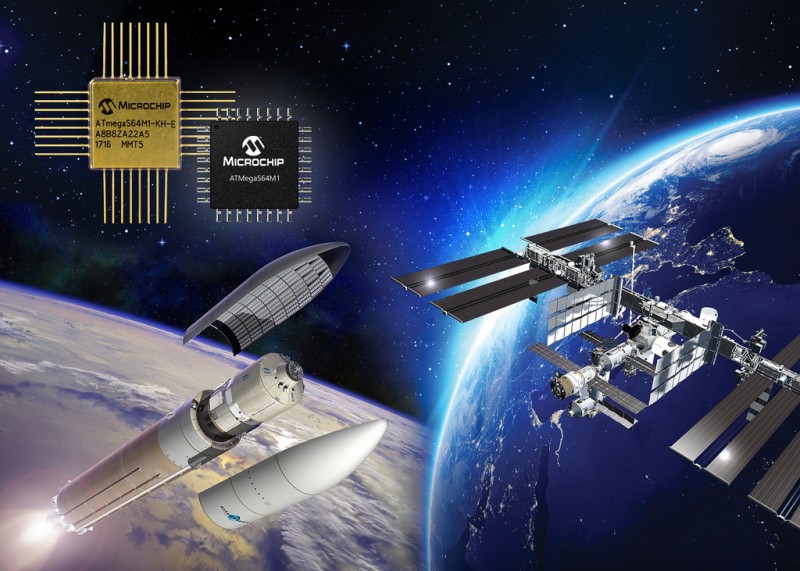 The ATmegaS64M1 is the second 8-bit megaAVR MCU from Microchip that uses a development approach called COTS-to-radiation-tolerant. This approach takes a proven automotive-qualified device, the ATmega64M1 in this case, and creates pinout compatible versions in both high-reliability plastic and space-grade ceramic packages. The devices are designed to meet radiation tolerances with the following targeted performances:

The new device joins the ATmegaS128, a radiation-tolerant MCU that has already been designed into several critical space missions including a Mars exploration plus a megaconstellation of several hundred Low Earth Orbit (LEO) satellites.

The ATmega64M1 COTS device, along with its full development toolchain including development kits and code configurator, can be used to begin development of hardware, firmware and software. When the final system is ready for the prototype phase or production, the COTS device can be replaced with a pin-out compatible, radiation-tolerant version in a 32-lead ceramic package (QFP32) with the same functionality as the original device. This leads to significant cost savings while also reducing development time and risk.

The ATmegaS64M1 meets the high operating temperature range of -55°C to +125°C. It is the first COTS-to-radiation-tolerant MCU to combine a Controller Area Network (CAN) bus, Digital-to-Analog Converter (DAC) and motor control capabilities. These features make it ideal for a variety of subsystems like remote terminal controllers and data handling functions for satellites, constellations, launchers or critical avionic applications.

To ease the design process and accelerate time to market, Microchip offers the STK 600 complete development board for the ATmegaS64M1, giving designers a quick start to develop code with advanced features for prototyping and testing new designs. The device is supported by Atmel Studio Integrated Development Environment (IDE) for developing, debugging and software libraries.