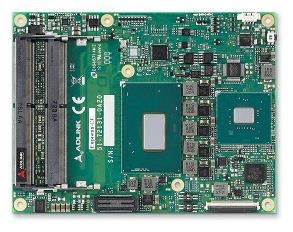 Whereas previous generations Intel Core i3 processors supported only dual cores with 3 MB cache, the Intel Core i3-8100H is the first in its class to support 4 CPU cores with 6 MB of cache. This major upgrade results in a more than 80% performance boost in MIPS (million instructions per second), and an almost doubling of memory/caching bandwidth, all at no significant cost increase compared to earlier generations. Intel Core i3 processors are widely recognized as the best valued processor and are therefore preferred in high-volume, cost-sensitive applications. They are popular choices in gaming, medical and industrial control.

These Hexa-core processors support up to 12 threads (Intel Hyper-Threading Technology) as well as an impressive turbo boost of up to 4.4 GHz. These combined features make the Express- CF/CFE well suited to customers who need uncompromising system performance and responsiveness in a long product life solution. The Express-CF/CFE has up to three SODIMM sockets supporting up to 48 GB of DDR4 memory (two on top by default, one on bottom by build option) while still fully complying with PICMG COM.0 mechanical specifications. Modules equipped with the Xeon processor and CM246 Chipset support both ECC and non-ECC SODIMMs.

Graphics outputs include LVDS and three DDI ports supporting HDMI/DVI/DisplayPort and eDP/VGA as a build option. The Express-CF/CFE is specifically designed for customers with high-performance processing graphics requirements who want to outsource the custom core logic of their systems for reduced development time. In addition to the onboard integrated graphics, a multiplexed PCIe x16 graphics bus is available for discrete graphics expansion.

Input/output features include eight PCIe Gen3 lanes that can be used for NVMe SSD and Intel Optane memory, allowing applications access to the highest speed storage solutions and include a single onboard Gbit Ethernet port, USB 3.0 ports and USB 2.0 ports, and SATA 6 Gb/s ports. Support is provided for SMBus and I2C. The module is equipped with SPI AMI EFI BIOS with CMOS backup, supporting embedded features such as remote console, hardware monitor and watchdog timer.