Murata Manufacturing has introduced the LQW32FT series for automotive power over coax (PoC) circuits. This inductor provides high impedance in a wide band, with inductance of 47µH in the 1210-inch size (3.2 mm x 2.5mm). Mass production was already started in November 2017. 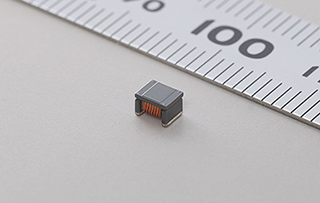 PoC is increasingly used with SerDes equipment in automotive applications in order to reduce weight, with a single coax cable transferring power and image data for an on-board camera. In former PoC implementations, large and small impedance several inductors were needed to handle the broadband signal at the circuit processor and to maintain high impedance in a wide band to separate the signal and power.

The LQW32FT series allows a single inductor to replace the multiple components that were formerly necessary. This supports efforts to save space and reduce the overall size of a system, and to lower total DC resistance. This component also provides a 125℃ maximum for the usage environment temperature, making it suitable for automotive circuits. The LQW32FT series is expected to be further expanded to support the high-speed signal transmissions needed by the market.