Hardkernel unveiled its open-spec, Ubuntu-ready Odroid-N1 SBC a year ago with a Rockchip RK3399 SoC. Since it was scheduled for June shipment, we included it our reader survey of 116 hacker boards. Yet, just before we published the results, including a #16 ranking for the N1, Hardkernel announced it was shelving the board due to sourcing problems and switching to a similar new board with an unnamed new SoC. The Odroid-N2 would also switch to DDR4 RAM from the previously announced DDR3, which was in short supply. 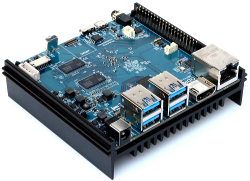 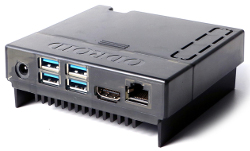 Odroid-N1 with heatsink (left) and within black case
(click images to enlarge)
The Odroid-N2 will arrive in April about four months later than intended, but with a much lower $63 (2GB RAM) and $79 (4GB) price compared to the original Odroid-N1 goal of “about $110.” The new model has also advanced to a similarly hexa-core, but much faster Amlogic S922X SoC, which was unveiled in September along with the quad-core -A53 Amlogic S905X2 and S905Y2.

Odroid-N2 CPU benchmark comparison (left) and block diagram
(click images to enlarge)
Hardkernel has posted benchmarks that claim around 20 percent faster CPU performance than the RK3399-driven N1. The inclusion of a substantial metal heatsink and the placement of the SoC and RAM on the bottom of the board enable top speeds “without thermal throttling,” says the Odroid project. With the 4GB version (the only configuration announced for the N1), the N2’s 1320MHz DDR4-RAM is claimed to be 35 percent faster than the N1’s 800MHz DDR3.

Although it may not make much sense to compare the Odroid-N2 to a board that never shipped, it should be noted that the Odroid-N1’s PCIe-based SATA connectors (also found on a few other RK3399 boards) have disappeared. However, you get 4x USB 3.0 host ports instead of a split between 3.0 and 2.0. 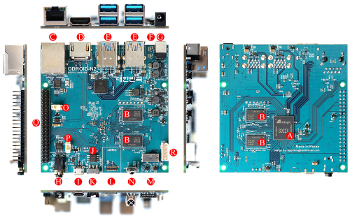 The USB ports sit next to a faster GbE port (about 1Gbps) and a 4K-ready HDMI port which is variablly listed as 2.0 and 2.1. For wireless, you’ll need to use one of the USB ports.

Legend for detail view above
(click image to enlarge)
The Odroid-N2 is slightly smaller than the N1 at 90 x 90 x 17mm and has a different design. Several ports such as the micro-USB OTG port and new IR sensor and composite A/V jack appear on the opposite coastline. The A/V jack includes a high-quality audio DAC (384Khz/32bit) with dynamic range, near-100dB SNR, and Total-Harmonic-Distortion lower than 0.006 percent, claims the Odroid project.

The 40-pin expansion header provides 25x GPIO, 2x I2C, SPDIF, and other 3.3V interfaces except for the dual 1.8V ADC signals. The pinout is said to be similar to the Amlogic S905 based Odroid-C2. There’s a wide-range 7.5-20V DC jack, and power consumption is listed as 1.8W idle to 5.5W CPU stress. No operating range was listed, but benchmarks suggest it runs run fine at 35°C.

The Odroid-N2 is available with 64-bit Ubuntu 18.04 LTS with Linux 4.9.152 LTS and Android 9 Pie “with full source code BSP and pre-built image together.” There is no X11 GPU driver and the Mali G52 GPU Linux driver currently works only on the framebuffer, but there’s a hardware-accelerated VPU driver. A Linux Wayland driver and Vulkan capable GPU driver for Android are in the works. 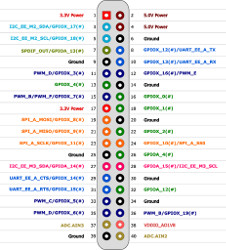 Odroid-N2 in white case (left) and GPIO pinout
(click images to enlarge)
The board ships with 8MB SPI along with a boot select switch and a Petitboot app. It requires removal of any bootable eMMC while you’re making the switch.

Odroid boards, such as the ever popular Odroid-XU4 have usually scored high in our reader surveys due to solid HW/SW quality, vigorous open source support, and a devoted community. The Odroid project recently branched into x86 territory with its Intel Gemini Lake based Odroid-H2.

Specifications listed for the Odroid-N2 include:

The Odroid-N2 will go on sale in late March with shipments beginning in April. Some engineering samples will head out to a lucky few over the next week. Pricing is $63 (2GB RAM) and $79 (4GB) price. More information may be found on Hardkernel’s Odroid-N1 announcement and product page and wiki.

This article originally appeared on LinuxGizmos.com on February 13.