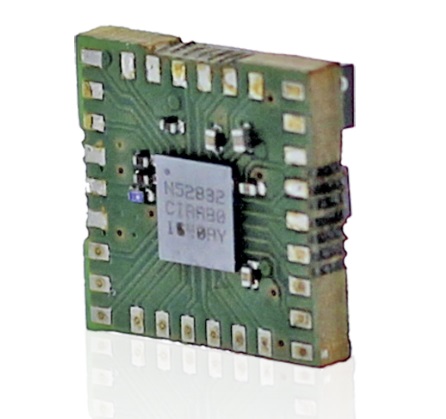 The nP-BLE52 module employs a proprietary power management IC—integrated alongside Nordic’s nRF52832 Wafer-Level Chip Scale Package (WL-CSP) SoC in a System-in-Package (SiP)—which enables it to cut power to the SoC, putting it in sleep mode, before waking it up a pre-set time and in the same state as before it was put to sleep. In doing so the SoC’s power consumption in sleep mode is reduced to 10 nA, making it well suited for IoT applications where battery life is critical by potentially increasing cell lifespan 10x.

In active mode, the nRF52832 SoC runs normally. The SoC has been engineered to minimize power consumption with features such as the 2.4GHz radio’s 5.5mA peak RX/TX currents and a fully-automatic power management system. Once the Nordic SoC has completed its tasks, it instructs the nP-BLE52 to put it to sleep and wake it up again at the pre-set time. The nP-BLE52 then stores the Nordics SoC’s state variables and waits until the nRF52832 SoC needs to be powered up again. On wake-up, the device uploads the previous state variables, allowing the Nordic SoC to be restored to the same operational state as before the power was cut. The SoC’s start-up is much more rapid than if it was activated from a non-powered mode.

The nP-BLE52 module also features a low power MCU which can be set to handle external sensors and actuators when the Nordic chip is switched off. In this state, the module still monitors sensors and buffer readings and can trigger wake-ups if these readings are above predetermined thresholds, while consuming less than 1 uA. The nP-BLE52 also integrates an embedded inertial measurement unit (IMU).

The module’s power management is controlled through a simple API, whereby the user can predetermine the duration of the Nordic SoC’s sleep mode, set the wake-up time and date parameters, and select pins for other on/off triggers.

The module offers IoT developers several advantages, either extending battery life and/or reducing the size of the battery required to power the application thereby reducing the end-product footprint. Longer battery life also reduces or eliminates battery swaps and enables the developer to better adjust for remaining useful battery life as the battery discharges. The module is suitable for any battery-powered device which is not required to be constantly active, for example asset tracking, remote monitoring, beacons, and some smart-home applications.