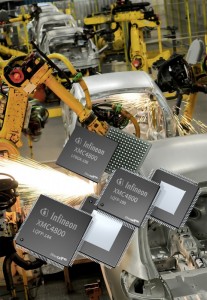 The EtherCAT node is integrated on an ARM Cortex-M-based microcontroller with on-chip flash and analog/mixed signal capability. The XMC4800 series comprises at least 18 members varying in memory capacity, temperature range and packaging. All XMC4800 microcontrollers will be AEC Q100 qualified, making them also suited for use in commercial, construction, and agricultural vehicles.

The XMC4800 series is a member of the XMC4000 family, which uses the ARM Cortex-M4 processor and was specifically developed for use in the automation of manufacturing and buildings as well as electric drives and solar inverters. The XMC4800 series offers a seamless upgrade path to EtherCAT technology with pin and code compatibility to the established XMC4000 microcontrollers. The XMC4800 enables the use of EtherCAT under the harsh condition of up to 125°C ambient temperature.

With the integration of the EtherCAT functionality, the XMC4800 enables the most compact design without need for a dedicated EtherCAT ASIC, external memory and clock crystal. It offers a 144-MHz-CPU, up to 2 MB of embedded flash memory, 352 KB of RAM and a comprehensive range of peripheral and interface functions. The peripherals include four parallel fast 12-bit A/D converter modules, two 12-bit D/A converters, four delta sigma demodulator modules, six capture/compare units (CCU4 and CCU8), and two positioning interface modules. In addition to its EtherCAT functionality, its communication functions comprise interfaces for Ethernet, USB, and SD/MMC. Also, the XMC4800 series offers six CAN nodes, six serial communication channels, and one external bus interface for communication. The three package options are LQFP-100, LQFP-144, and LFBGA-196.

Samples of the series XMC4800 with EtherCAT technology will be available in August 2015. Volume production is scheduled for Q1 2016.