The iW3606 and the iW3608 are single-stage, solid-state lighting (SSL) LED drivers. The 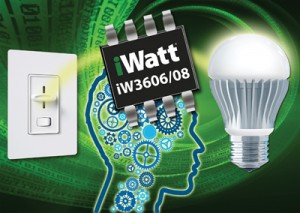 The LED drivers’ OTP and derating feature addresses the thermal issues caused by the high and unpredictable operating temperatures in dimmable SSL applications. iWatt’s OTP derating monitors the temperature inside sealed SSL bulbs. When thermal conditions reach a point set by the system designer, the LED drivers automatically reduce the current drive to the LEDs, lowering the power dissipation and resulting in a cooler overall operation.

The iW3606 and the iW3608 feature a wide, flicker-free dimming range from 100% to 1% of measured light to closely match incandescent bulbs’ dimming performance. This enables smooth “natural” dimming with no light drop-out at the low end of the dimming range and virtually no dead travel where the light turns off before the dimmer control reaches the bottom of its travel.

The LED drivers’ low internal power consumption enables them to start at less than 5% of light output, which is a very low dimming level. This virtually eliminates pop-on, in which the light does not turn on at low dimmer levels and, as the dimmer level is raised, the light suddenly turns on. The low power consumption also helps eliminate popcorning effects, in which various bulbs in multiple-light installations on the same dimmer circuit can turn on at different dimmer-setting thresholds.