During the annual Computex 2017 event, Intel unveiled its new Intel Core X-series processor family with 4 to 18 cores, which now includes the new Intel Core i9 Extreme Edition processor, the first consumer desktop CPU with 18 cores and 36 threads. Intel announced plans to integrate Thunderbolt 3 into all future Intel CPUs and to release the Thunderbolt protocol specification to the industry. 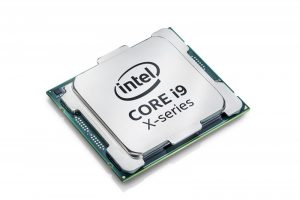 With Intel focusing its attention on competing with ARM and now saying that they want to focus on something else than PC’s, the world of computing has been stalling and no significant gains on processor performance have been announced. The result was disastrous for Windows PC makers, which among other things also failed to evolve to newer standards on connectivity, like Thunderbolt 3 and USB-C. Apple was also affected, with almost three years without a single upgrade on its popular Mac Mini, iMac desktop and Mac Pro computers. The news from Intel that a new generation of processors is finally coming will bring some hope to the industry, including to many audio professionals that use computers and workstations, and need all the memory, storage and power they can get.

Another announcement was the Intel Compute Card, a modular computing platform with all the elements of a full computer in a size just larger than a credit card. According to Intel, the Compute Card will start shipping in August 2017 and will allow devices outside of PCs to be connected, integrating compute into everything from smart screens to interactive appliances to VR headsets. Intel Partners who have products showing at Computex include Contec, ECS, Foxconn, LG Display, MoBits Electronics, NexDock, Sharp, Seneca, SMART Technologies, Suzhou Lehui Display and TabletKiosk. Other partners currently working on solutions include Dell, HP and Lenovo.

The Intel Compute Card will initially be available in four versions, with 7th Gen Intel Core i5 vPro or i3 processors, as well as Pentium N4200 and Celeron N3450 processors. All will feature 4-GB DDR3 memory, 128 GB of SSD or 64GB of eMMC storage, and all support Wi-Fi.11ac and Bluetooth 4.2. In addition, HTC announced a Compute Card-based VR device also using Intel WiGig technology.

On what is possibly the most interesting front for computing, outside of pure processing power, Intel announced plans to integrate Thunderbolt 3 into all future Intel CPUs and to release the Thunderbolt protocol specification to the industry.

Intel has a long history of leading the industry in I/O innovation. In the late 1990s, Intel developed USB, which made it easier and faster to connect external devices to computers, consolidating a multitude of existing connectors. Intel continued this effort with Thunderbolt 3, one of the most significant cable I/O updates since the advent of USB.

Intel’s vision for Thunderbolt was not just to make a faster computer port, but a simpler and more versatile port available to everyone, allowing for single-cable docks with 4K video support, unlimited and faster-than-ever storage, and external graphics accelerator engines. A world where one USB-C connector does it all – today, and for many years to come.

Microsoft has also enhanced Thunderbolt 3 device plug-and-play support in the now available Windows 10 Creators Update. Intel and Microsoft plan to continue to work together to enhance the experience in future versions of the Windows operating system.

In addition to support from Apple and Microsoft, Thunderbolt 3 has already gained significant adoption with more than 120 PC designs on systems with 7th Generation Intel Core processors, the latest MacBook Pros and dozens of peripherals – expected to ramp to nearly 150 by the end of 2017.