Leading RF module designer and manufacturer Lemos International/Radiometrix recently launched a new range of flexible, frequency-programmable, RF power adjustable radios. The new NTX2B Transmitter offers industry-leading true Narrow-Band FM performance. It is available on user/factory-programmable custom frequencies between 425 and 470 MHz. Superseding the popular NTX2, the new transmitter offers greater stability and improved performance due to VCTCXO reference. The NTX2B provides users with the ability to dynamically reprogram the module via the microcontroller UART to other channel frequencies in the band or store new frequency/power settings on EEPROM. 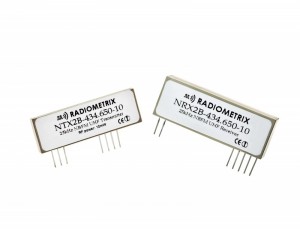 The standard NTX2B version is a 10-mW, 25-kHz narrow-band Transmitter with data rates up to 10 kbps and is available on 434.075 and 434.650 MHz European SRD frequencies and 25 mW on 458.700 MHz for the UK. The NTX2B is also available with 12.5- or 20-kHz channel spacing for licensed US FCC Part 90 or legacy European Telemetry/Telecommand bands. The NTX2B features an internal LDO voltage regulator that enables the transmitter to be operated down to 2.9 V and up to 15-V voltage supply at a nominal current consumption of 18 mA and less than 3 µA in power-down mode, which can be enabled within 5 ms. NTX2B can transmit both digital and 3-VPP analog signals. Offering greater range than wideband modules, the transmitter can be paired with the new NRX2B receiver for a usable range of over 500 m, which is ideal for performance-critical, low-power wireless applications, including security, sensor networks, industrial/commercial telemetry and remote control.