NXP announced its S32G automotive networking processor in January at CES along with a S32G-VNP-RDB reference design board that has yet to ship. Soon, developers will have another option in the MicroSys miriac SBC-S32G274A development kit, built around a miriac MPX-S32G274A module. The products follow other MicroSys Miriac boards with Time Sensitive Networking (TSN) including last year’s miriac MPX-LS1028A and SBC-LS1028A-TSN. The kit supports industrial automation, medical, railway & transportation, construction, and defense application in addition to automotive networking. 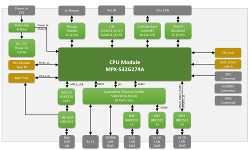 The MPX-S32G274A module on the SBC-S32G274A is equipped with 4GB soldered LPDDR4 RAM at 1600MT/s plus 32GB eMMC and 512MB QuadSPI flash. We saw no separate product page for the miriac MPX-S32G274A module. There is, however, a page for MicroSys’ Linux-powered MPX-S32V234 module based on NXP’s earlier, image processing focused S32V234 automotive SoC with 4x -A53 cores.

The SBC-S32G274A is further equipped with automotive I/O including 2x Flexray, 4x LIN, and 18x CAN, including 2x CAN FD. There are also 12x analog inputs to ADCs, a microSD slot, a micro-USB serial debug port, and JTAG and 40-pin AURORA debug interfaces.

Expansion features include a mini-PCIe slot and M.2 M-key socket. There’s a 12V (9-15V range) DC input jack and a supercapacitor for the board’s real-time clock. The board will ship in both a standard kit and a kit with a Linux BSP, a power supply, and undisclosed accessories. A version with -40 to 85°C support is available upon request.

This article originally appeared on LinuxGizmos.com on February 7, 2020.