In August, FriendlyElec introduced the NanoPi M4, which was then the smallest, most affordable Rockchip RK3399 based SBC yet. The company has now eclipsed the Raspberry Pi style, 85 mm x 5 6 mm NanoPi M4 on both counts, with a 60 mm x 45 mm size and $45 promotional price ($50 standard). The similarly open-spec, Linux and Android-ready NanoPi Neo4, however, is not likely to beat the M4 on performance, as it ships with only 1 GB of DDR3-1866 instead of 2 GB or 4 GB of LPDDR3. 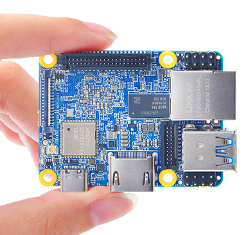 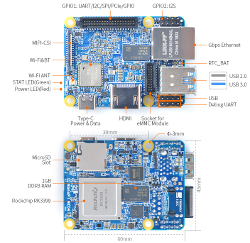 NanoPi Neo4 and detail view
(click images to enlarge)
This is the first SBC built around the hexa-core RK3399 that doesn’t offer 2GB RAM at a minimum. That includes the still unpriced Khadas Edge, which will soon launch on Indiegogo, and Vamrs’ $99 and up, 96Boards form factor Rock960, in addition to the many other RK3399 based entries listed in our June catalog of 116 hacker boards.

Considering that folks are complaining that the quad -A53, 1.4 GHz Raspberry Pi 3+ is limited to

Perhaps size was a determining factor in limiting the board to 1 GB along with price. Indeed, the 60 mm x 45 mm footprint ushers the RK3399 into new space-constrained environments. Still, this is larger than the earlier 40 mm x 40 mm Neo boards or the newer, 52 mm x 40mm NanoPi Neo Plus2, which is based on an Allwinner H5.

We’re not sure why FriendlyElec decided against calling the new SBC the NanoPi Neo 3, but there have been several Neo boards that have shipped since the Neo2, including the NanoPi Neo2-LTS and somewhat Neo-like, 50 x 25.4mm NanoPi Duo.

The NanoPi Neo4 differs from other Neo boards in that it has a coastline video port, in this case an HDMI 2.0a port with support for up to 4K@60Hz video with HDCP 1.4/2.2 and audio out. Another Neo novelty is the 4-lane MIPI-CSI interface for up to a 13-megapixel camera input. 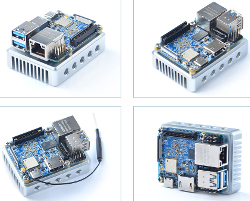 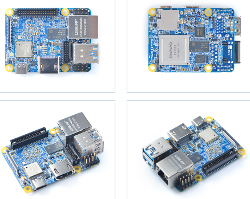 NanoPi Neo4 with and without optional heatsink
(click images to enlarge)

You can boot a variety of Linux and Android distributions from the microSD slot or eMMC socket (add $12 for 16GB eMMC). Thanks to the RK3399, you get native Gigabit Ethernet. There’s also a wireless module with 802.11n (now called Wi-Fi 4) limited to 2.4 GHz Wi-Fi and Bluetooth 4.0.

The NanoPi Neo4 is equipped with coastline USB 3.0 and USB 2.0 host ports plus a Type-C power and OTG port and an onboard USB 2.0 header. The latter is found on one of the two smaller GPIO connectors that augment the usual 40-pin header, which like other RK3399 boards, comes with no claims of Raspberry Pi compatibility. Other highlights include an RTC and -20 to 70℃ support.

Specifications listed for the NanoPi Neo4 include:

The NanoPi Neo4 is available for a promotional price of $45 (regularly $50) plus shipping, which ranges from $16 to $20. More information may be found on FriendlyElec’s NanoPi Neo4 product page and wiki, which includes schematics, CAD files, and OS download links.