Mouser Electronics has signed a global distribution agreement with Onion, a global provider of integrated wireless microprocessor modules and IoT development kits. Through the agreement, Mouser will distribute the Omega2+ device, kits, and accessories, ideal for applications such as home automation, coding education, Wi-Fi media servers, robotics and networking. 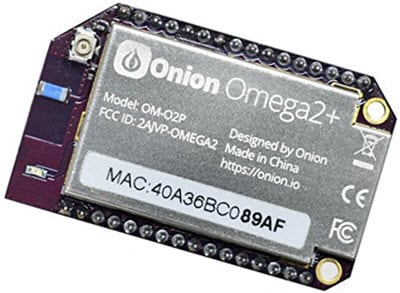 The Onion product line, available from Mouser Electronics, revolves around the Omega2+, (shown) an easy-to-use, expandable IoT computer packed with built-in Wi-Fi connectivity, a MicroSD card slot, and a powerful 580 MHz MIPS processor. Though just a fraction of the size of other single board computers, the Omega2+ is a full computer with a Linux operating system, 128 MB of DDR2 memory and 32 MB of flash storage. The device also offers 15 general-purpose inputs and outputs (GPIO), two PWM and two UART interfaces.

Mouser also now stocks a variety of docks and expansion boards, which provide additional functionality to the Omega2+ board. The Expansion Dock powers the Omega2+ and breaks out the GPIOs. The dock also allows engineers to expand their Omega2+ with expansion modules like OLED, relay, and servo. Additionally, engineers can use the Arduino Dock R2 and add the Omega2+ to existing Arduino-based projects. The Arduino Dock R2 is a full Arduino Uno that allows the Omega2 to control the Arduino’s ATmega microcontroller through a serial connection.

The Omega2 Starter Kit and Omega2 Maker Kit both include an Omega2+ board, expansion dock, breadboard, and a variety of components to help engineers quickly get started building circuits. The Maker Kit includes the same components as the Starter Kit and adds two servos, a DC motor, H-bridge chip, buzzer and three expansion boards.