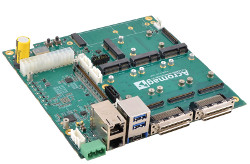 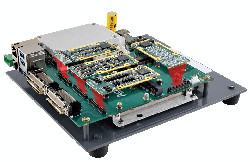 The AcroPack spec adds to the mini-PCIe interface a down-facing 100-pin connector “that securely routes the I/O through a carrier card to its integrated external connectors,” says Michigan-based Acromag. Four 68-pin VHDCI connectors securely route the field I/O to the AcroPack modules. The design is said to eliminate internal cables and “metalwork modifications.”

The ACEX4041, which we saw on CNXSoft, is currently available with only one unnamed 84 x 55mm Mini Type 10 (or Type 10 Mini) module equipped with a quad-core, 1.6GHz/2.0GHz Atom x5-E3940 with 12W TDP from Intel’s Apollo Lake generation. Acromag says the board is capable of hosting third-party Mini Type 10 modules that offer 4x PCIe lanes configured as an x4 port, including Intel Core i7 based modules.

The only other COM Express module sold by Acromag is the Intel 4th Gen “Haswell” Core based XCOM-6400 Type 6 module. Since our report on the XCOM-6400 back in 2013, Acromag has added an ACEX-4600 Type 6 carrier, which provides standard mini-PCIe and XMC/PMC expansion instead of the AcroPack slots. Acromag also sells PCIe, CompactPCI, VPX, and XMC carrier boards that do support AcroPack. 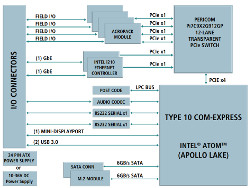 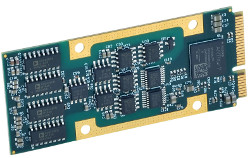 The 170 x 170mm ACEX4041-2000 configuration is equipped with 4GB RAM supplied by the Apollo Lake module. The board is equipped with a 9-port, 12-lane PCIe Gen 2 switch that “expands the single host PCIe x4 port to 6 independent x1 ports,” says Acromag.

The ACEX4041 provides coastline ports including 2x GbE (Intel i210), 2x USB 3.0, 2x RS-232, and a mini-DisplayPort. You also get Realtek HD Audio I/O and a JTAG header. Two of the four AcroPack slots are isolated.

The ACEX4041 is equipped with a SATA connector and an M.2 B/M-key 2242/2260/2280 slot. On the Development Lab System, which also ships with panel mounting, these interfaces are pre-loaded with two 500GB SSDs for 1TB storage total.

The system provides a redundant auto-switch power capability for the 24-pin ATX and 10-36V DC power supplies and offers a variety of DC fuses. Heatsinks and cables are optional.

This article originally appeared on LinuxGizmos.com on November 18, 2019.