Cypress Semiconductor has announced a new series in its Traveo automotive microcontroller family with more memory to support a hybrid instrument cluster with 3D graphics and up to 6 traditional gauges, as well as a head-up display. The highly integrated, single-chip devices in the S6J32xEK series include an advanced 3D and 2.5D graphics engine and provide scalability with Cypress’ low-pin-count HyperBus memory interface. The series continues Cypress’ expansion of its broad automotive portfolio with differentiated system performance via its MCUs, wireless radios, capacitive-touch solutions, memories and Power Management ICs (PMICs). 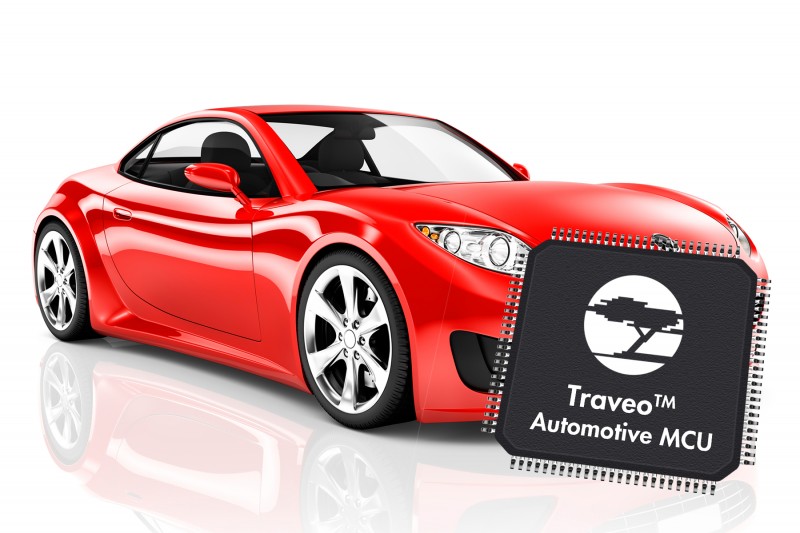 The Traveo S6J32xEK series integrates up to 4MB of high-density embedded flash, 512 KB RAM and 2 MB of Video RAM, an ARM Cortex-R5 core at 240 MHz performance, a Low-Voltage Differential Signaling (LVDS) video output, a Low-Voltage Transistor-Transistor Logic (LVTTL) video output and a 6x stepper motor control. This combination enables the devices to serve as single-chip solutions to drive two displays. The devices have up to two 12-pin HyperBus memory interfaces that dramatically improve read and write performance of graphical data and other data or code.

The Traveo S6J32xEK series include 50 channels of 12-bit Analog to Digital Converters (ADC), 12 channels of multi-function serial interfaces and I2S interfaces with an audio to output the complex, high-quality sounds required in today’s instrument clusters. The devices’ support for Ethernet AVB delivers increased bandwidth in multimedia applications and reduced programming time. The S6J32xEK series offers functional safety features to support Automotive Safety Integrity Level (ASIL) B, and the devices feature a wide ambient temperature range of -40˚C to +105˚C. The Traveo family is backed by a comprehensive tools and software ecosystem that simplifies system integration, including AUTOSAR MCAL 4.0.3 support.

The Traveo S6J32xEK series is sampling now and will be in production in the first quarter of 2018. The MCUs are available in a 208-pin and 216-pin thermally enhanced quad flat package (TEQFP).