Aaeon’s M.2 and mini-PCIe “AI Edge Computing Modules” are based on Kneron’s energy-efficient, dual Cortex-M4-enabled KL520 AI SoC, which offers 0.3 TOP NPU performance on only half a Watt. 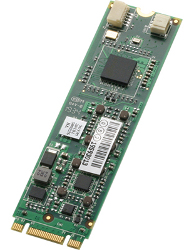 Aaeon’s 0 to 70°C tolerant AI Edge Computing Modules operate at 0.5W to 0.9W. There do not appear to be any functional differences between the three modules, which all supply UART and JTAG debug interfaces and communicate with the host processor via USB signals. The modules support acceleration for ONNX, TensorFlow, Keras, Caffe frameworks with models including Vgg16, Resnet, GoogleNet, YOLO, Tiny YOLO, Lenet, MobileNet, and DenseNet. 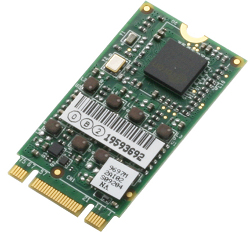 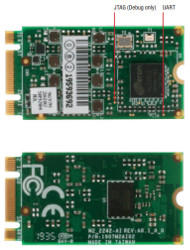 The KL520 AI SoC combines dual Cortex-M4 MCUs with Kneron’s Neural Processing Unit (NPU) chip, which can be licensed separately. The power-efficient KL520 supports co-processor use, as deployed in Aaeon’s AI Edge Computing Modules, in scenarios that would typically connect to an embedded Linux computer. The SoC can also be used as a standalone, AI-enabled IoT node in applications such as smart door locks.

The KL520 AI SoC is designed to accelerate general AI models such as facial and object recognition, gesture detection, and driver behavior for AIoT applications including access control, automation, security, and surveillance. It can also be used to monitor consumer behavior in retail settings – a trend that could push even more customers to shop online. Aaeon notes, however, that the solution enhances privacy — and reduces latency — because edge AI devices do not require a cloud connection. 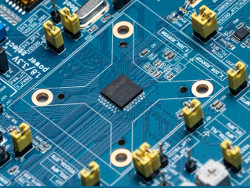 The Kneron NPU within the KL520 supports higher than 1.5 TOP per Watt, claims San Diego based Kneron. The IP can easily operate at under 0.5W “and can reach as low as 5 mW for specific applications,” says the company.

According to an EETimes story last week that preceded Aaeon’s announcement, the KL520 AI SoC provides only 0.3 TOP AI acceleration performance at 0.5 Watts, or the equivalent to 0.6 TOP/W. By comparison, the Myriad X runs at 1 TOP, but presumably with higher power consumption. This gives Aaeon customers a choice of two levels of AI acceleration: the less powerful, but more power-efficient AI Edge Computing Modules and the faster, but more demanding Myriad X-enabled AI Core X modules.

Kneron’s 57MB facial recognition model running on its NPU has been recognized by NIST (National Institute of Standards and Technology) as the best performing model under 100MB. Systems integrator TIIS used the model as part of a security system for the public banks of Taiwan. EETimes quotes Kneron COO Adrian Ong as saying that for embedded applications, the model can be compressed down to 32MB or even 16MB.

The KL520’s compiler is touted for its proprietary compression technology, which together with RANN, enables ultra-small footprint AI acceleration for smart home and smartphone applications such as facial recognition. Finally, Kneron mentions that its technology is especially applicable to various 3D sensor technologies such as structured light, dual-camera, ToF, and Kneron’s own 3D sensing technology.

Aaeon is the first company to commercialize the KL520. Other partners listed in Kneron’s May 2019 KL520 announcement include Eltron, Himax, Alltek, Pegatron, Orbbec, and Datang Semiconductor. EETimes reported that a second-gen version of the Kneron NPU due for sampling in Q1 2020 “will be able to accelerate both CNNs and RNNs (recurrent neural networks), for vision and audio applications.”Further information

Aaeon’s AI Edge Computing Modules featuring the KL520 AI SoC are available for order at an undisclosed price. Presumably, these will eventually be available as individually price accessories for UP boards and the like. More information may be found in Aaeon’s announcement and on its preliminary product pages for the M2AI-2280-520, M2AI-2242-520, and Mini-AI-520 modules. More on the KL520 AI SoC may be found on Kneron’s website.

This article originally appeared on LinuxGizmos.com on October 16.