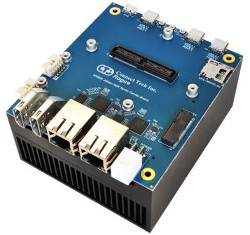 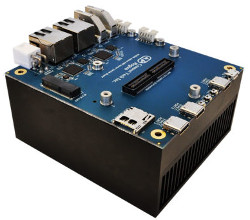 Rogue carrier with Xavier module (equipped with fan)
(click images to enlarge)
CTI also launched a Jetson AGX Xavier Mimic Adapter board that mediates between the Xavier and any CTI carrier for the Jetson TX1, TX2, and the latest industrial-focused version of the TX2 called the Jetson TX2i. These include the three TX2 boardsannounced in early 2017: the Cogswell carrier with GigE Vision, the Spacely carrier designed for cam-intensive Pixhawk drones, and the tiny, $99 Sprocket. CTI’s Jetson TX1 boards include the original Astro, as well as its later Orbitty and Elroy. 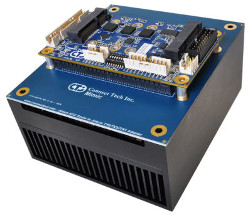 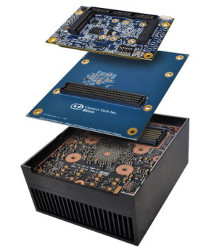 Jetson AGX Xavier Mimic Adapter with Xavier and Elroy carrier (left) and exploded view
(click images to enlarge)
The Jetson Xavier “enables a giant leap forward in capabilities for autonomous machines and edge devices,” says CTI. Nvidia claims the Xavier has greater than 10x the energy efficiency and more than 20x the performance of its predecessor, the Jetson TX2. The module — and the new CTI carriers — are available with a BSP with Nvidia’s Linux4Tegra stack. Nvidia also offers an AI-focused Isaac SDK. 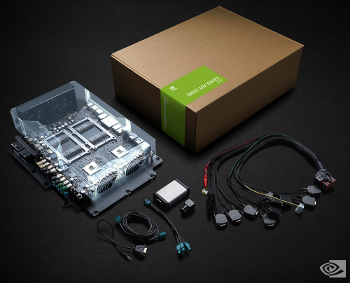 Nvidia Drive AGX Xavier Developer Kit
(click image to enlarge)
Since the initial Xavier announcements, Nvidia has added AGX to the Jetson Xavier name. This is also applied to the automotive version, which was originally called the Drive PX Pegasus when it was announced in Nov. 2017. This Linux-driven development kit recently began shipping as part of the Nvidia Drive AGX Xavier Developer Kit, which supports a single Xavier module or else a Drive AGX Pegasus version with dual Xaviers and dual GPUs.

CTI’s Rogue carrier board provides 2x GbE, 2x HDMI 1.4a, 3x USB 3.1, and a micro-USB OTG port. Other features include MIPI-CSI, deployable either as 6x x2 lanes or 4x x4 lanes, and expressed via a high-density camera connector breakout that mimics that of the official dev kit. CTI will offer a variety of rugged camera add-on expansion boards with options described as “up to 6x MIPI I-PEX, SerDes Inputs: GMSL or FPD-Link III, HDMI Inputs).” 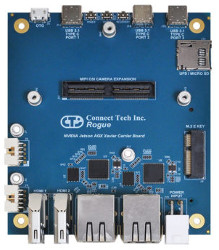 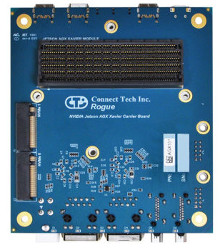 For storage, you get a microSD slot with UFS support, as well as 2x M.2 M-key slots that support NVMe modules. There’s also an M.2 E-key slot with PCIe and USB support that can load optional Wi-Fi/BT modules.

Other features include 2x CAN 2.0b ports, 2x UARTs, 4-bit level-shifted, 3.3 V GPIO, and single I2C and SPI headers. There’s a 9-19 V DC input that uses a positive locking Molex Mini-Fit Jr header. You also get an RTC with battery connector and power, reset, and recovery buttons and headers.

The Jetson AGX Xavier Mimic Adapter has the same 105 x 92mm dimensions as the Rogue, but is a simpler adapter board that connects the Xavier to existing CTI Jetson carriers. It provides an Ethernet PHY and regulates and distributes power from the carrier to the Xavier. 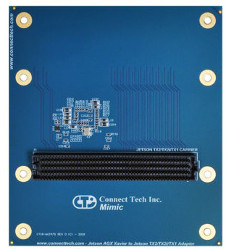 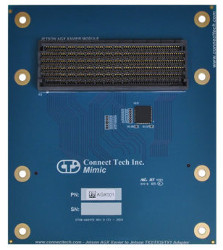 Mimic Adapter, front and back
(click images to enlarge)
The Mimic Adapter expresses a wide variety of interfaces detailed on the product page, including USB 3.0, PCIe x4, SATA, MIPI-CSI, HDMI/DP/eDP, CAN, and more. Unlike the Rogue, it’s listed with an operating range: an industrial -40 to 85°C.

This article originally appeared on LinuxGizmos.com on October 17.