Variscite has launched a “VAR-SOM-MX8M-MINI” module that runs Linux on the i.MX8M Mini with up to 4GB DDR4, 64GB eMMC, and WiFi-ac plus an optional new Dev Kit. There’s also an upcoming VAR-SOM-MX8M-NANO with an i.MX8M Nano.

The company has opened $53 and up orders for a Linux-ready VAR-SOM form-factor spin of NXP’s i.MX8M Mini, which has previously appeared on its smaller DART-MX8M-Mini. The VAR-SOM-MX8M-MINI, which is also available with a new development kit (see farther below), joins other pin-compatible VAR-SOM modules including Variscite’s larger VAR-SOM-MX8, featuring the more powerful i.MX8 QuadMax, and the VAR-SOM-MX8X, built around the low-power, Cortex-A35 based i.MX8X. 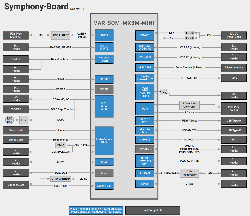 While researching this story we noticed there’s also a product page — but no announcement — for a VAR-SOM-MX8M-NANO module built around the lower-power i.MX8M Nano (see farther below). NXP just announced an i.MX8M Plus SoC that is roughly based on the Nano, but offers a variety of coprocessors including a neural processor for AI. It also announced an S32G SoC for ADAS-enabled cars.

Debian Buster and Yocto Sumo with Boot2QT are available, along with Android 9.0 – all based on Linux 4.14.98. There’s also FreeRTOS support for the Cortex-M4 core.

Media interfaces include MIPI-DSI and dual LVDS, both at up to 24-bit 1920 x 1080 resolution that support resistive and capacitive touchscreens. There’s also a MIPI-CSI camera interface and headphone, line-in, line-out, and analog and digital microphones. The module expoits the i.MX8 family’s generous digital audio support with 5x I2S (SAI), S/PDIF, and 4-channel PDM.

The VAR-SOM-MX8M-MINI is available with a Starter Kit and touchscreen enabled Development Kit, both of which are based on a Symphony carrier board. The 170 x 90mm board is available with schematics, CAD files, and extensive documentation. The board supports other i.MX6 and i.MX8 VAR-SOM modules, including the upcoming VAR-SOM-MX8M-NANO covered below. 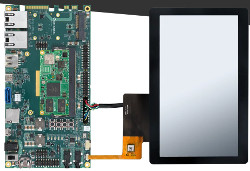 The Symphony carrier is equipped with 2x GbE, USB 2.0 host, USB 3.0 OTG Type-C, and micro-USB debug ports. HDMI 2.0a and DisplayPort 1.3/eDP 1.4 ports are each available via optional extension cards.

Dual LVDS interfaces support a 7-inch capacitive touchscreen, which is bundled with the Dev Kit. You also get dual audio jacks, a digital mic, and MIPI-CSI x4. An optional Parallel CSI 8-bit interface is available via an extension card that support an optional camera board.

The Symphony is further equipped with a microSD slot, a mini-SATA connector, a CAN transceiver with CAN FD support, and various header interfaces, including GPIO. An RTC is onboard along with a 12V input. Both kits add an antenna, microSD boot/rescue cards, and a design package. The Dev Kit also adds the touchscreen, micro-USB and GbE cables, and a 5V power supply.

The yet-to-be announced VAR-SOM-MX8M-NANO is Variscite’s first module based on the i.MX8M Nano, a stripped down, under 2W TDP spin-off of the similarly 14nm fabricated i.MX8M Mini. You can order the module with 1x to 4x -A53 cores, which are clocked to 1.5GHz instead of 1.8GHz on the Mini. Yocto Linux and Android are supported. 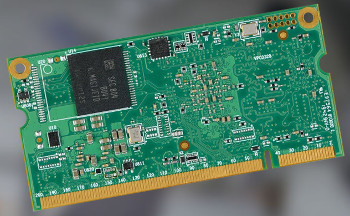 Instead of the Cortex-M4, there’s a faster, Cortex-A7 MCU, which typically we see clocked at 600MHz, but here is said to achieve 650MHz. The Nano’s Vivante GPU lacks the Mini’s video processing unit.

Other Nano-based modules include the recent Congatec Conga-SMX8-Nano. Some modules, such as the iWave iW-RainboW-G34M-SM, support both the Nano and the Mini.

The “cost-optimized” VAR-SOM-MX8M-NANO has the same size, power, temperature, eMMC/NAND, audio features, and single- or dual-band WiFi options found of the VAR-SOM-MX8M-MINI. However, it offers only 512MB to 2GB LPDDR4.

VAR-SOM-MX8M-NANO media interfaces include MIPI-DSI and dual LVDS, both at up to 24-bit 1920 x 1080 and supporting resistive and capacitive touchscreens. There’s also a MIPI-CSI2 camera interface and support for the Symphony carrier.

The VAR-SOM-MX8M-MINI is available for orders in production quantities starting at $53 per unit in 1K volume. More information may be found in Variscite’s announcement and product page.

More on the upcoming VAR-SOM-MX8M-NANO may be found on the product page.

This article originally appeared on LinuxGizmos.com on January 9, 2020.