Kontron invented the ULP-COM standard that formed the basis of the SMARC form factor, and it has delivered numerous SMARC modules over the years, including Arm products such as the Nvidia Tegra K1 based SMC-NTKE1. Now it has unveiled the first module we’ve seen in any form factor with NXP’s dual-core, Cortex-A72 powered QorIQ Layerscape LS1028 SoC.

SMARC-sAL28
(click image to enlarge)
The SMARC-sAL28 module is compliant with the IEEE 802.1 TSN standard, which offers guaranteed latency and Quality of Service (QoS) with time synchronization to enable “a timely and highly available delivery of data packets,” says Kontron. TSN Ethernet can replace more expensive, proprietary fieldbus technology while also offering the advantage of being able to “simultaneously communicate seamlessly to the IT level.”

No clock rate was listed for the LS1028 SoC, which NXP refers to as the LS1028A. The SoC integrates a four-port TSN switch and two separate TSN Ethernet controllers. Like NXP’s other networking oriented LSx QorIQ Layerscape SoCs, it supports NXP’s EdgeScale suite of secure edge computing device management tools. It’s the only LSx SoC that features a 3D graphics capable GPU. 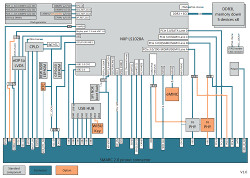 Two models are available. One has 2x TSN-capable, switched GbE controllers “that can be directly used by the carrier,” says Kontron. The second version supports 4x switched TSN-capable GbE ports via the QSGMII interface with an additional TSN-capable GbE controller. This second option provides a total of 5x TSN-ready GbE ports ports “using a quad-PHY on the carrier.” This 5x GbE model sacrifices one of the 2x PCIe x1 interfaces, which can also be deployed as a single PCIe x4 connection.

The SMARC-sAL28 provides a dual-channel LVDS interface, one of which can be swapped out for eDP as a BOM option. The second LVDS offers a BOM option swap-out for either an HDMI or DisplayPort.

The module is further equipped with a single USB 3.0, 6x USB 2.0, and 4x RX/TX serial interfaces. Other I/O includes 2x I2C, 2x SPI, 12x GPIO, and single SDIO, CAN, and I2S connections. Options include a Wibu security chip with Kontron Approtect security software, as well as an RTC.

The SMARC-sAL28 is “coming soon” at an undisclosed price. More information may be found in Kontron’s SMARC-sAL28 announcement and product page.