At Embedded World this week, F&S is showing a working demo of a tiny compute module due in Q2 that runs a custom Linux stack on NXP’s i.MX8M Nano. At 40 x 35mm, the PicoCore MX8MN is the smallest of the Nano-based modules we’ve seen, which include IWave’s 67.6 x 37mm iW-RainboW-G34M-SM SODIMM module and a pair of 82 x 50mm SMARC modules: Congatec’s Conga-SMX8-Nano and Avnet/MSC’s MSC SM2S-IMX8MINI. 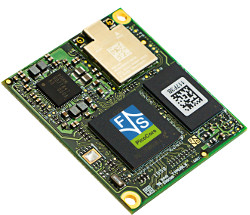 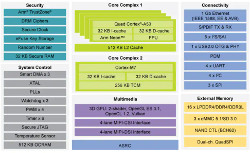 The IWave and MSC modules also support the similar, but slightly higher end i.MX8M Mini, but the PicoCore MX8MN is limited to the Nano. Its feature set is very close to that of F&S’ similarly sized, Mini-based PicoCore MX8MM. In fact, the image supplied by F&S appears to be identical to that of the PicoCore MX8MM. There’s still no image on the product page.

Like the i.MX8M Mini, the i.MX8M Nano has up to 4x 14nm-fabricated Cortex-A53 cores, but they top out at 1.5GHz instead of 1.8GHz. It also similarly features a Vivante GC7000UL 3D/2D GPU with support for OpenGL, OpenCL and Vulkan. It lacks the Mini’s video processing unit (VPU), but instead of the Mini’s 400MHz Cortex-M4 MCU, there’s a more powerful, Cortex-M7. Althought the -M7 core is typically clocked to 600MHz, F&S says it has cranked it up to 650MHz.

The PicoCore MX8MN module provides single- and quad-core SKUs, which have some different features. Generally speaking, the module supports up to 8GB RAM and either up to 512MB SLC NAND flash or up to 32GB eMMC. A small amount of NOR flash is available for storing device parameters. There’s also a choice of 0 to 70°C and -40 to 85°C models and optional WiFi with Bluetooth 5.0 LE.

None of these features are listed on the single- and quad-core SKU spec sheets, however. The single-core PicoCore MX8MN-V1-LIN model available in Q2 lists 256MB DDR3L (as opposed to LPDDR4 on its Nano competitors) plus 256MB NAND. The quad-core PicoCore MX8MN-V5-LIN, which is listed as sampling, offers 512MB DDR3L and 4GB eMMC. It’s unclear if these are only the minimal configurations or if this is all you will get in the early going.

The quad-core PicoCore MX8MN-V5-LIN model adds a CAN interface and an Ethernet controller with support for up to 2x GbE ports. It provides dual 24-bit LVDS instead of a single 4-lane MIPI-DSI connection on the single-core V1 SKU, both with HD resolution. The V5 model offers line-in, line-out, mic, and headphone audio connections as opposed to I2S audio on the V1. The other difference is that the V5 supports an RTC on a carrier while the V1 has one built in.

Both PicoCore MX8MN models support 3.8-5.5VDC power and run at a typical 2 Watts. The under 10-gram modules are listed only with 0 to 70°C support. Long-term availability extends to 2029.

F&S supplies its own OS stack, which supports Buildroot and Yocto based Linux for the -A53 cores and FreeRTOIS for the Cortex-M7. The extensively documented stack includes tested drivers for all I/O and “many” different touch controllers. There’s also a downloadable virtual machine for developing applications including QT apps. The system ships with Secure Boot and makes use of an NXP A71CH Plug-&-Trust-Secure-Element on the module with optional trusted certificate programming services available.

The single-core PicoCore MX8MN-V1-LIN is available in Q2 while the PicoCore MX8MN-V5-LIN is sampling, with no ship date listed. More information may be found in F&S Elektronik Systeme’s announcement and product page.

This article originally appeared on LinuxGizmos.com on February 18, 2020.