Aaeon’s community-backed UP project, which most recently brought us the Intel Apollo Lake based Up Squared and UP Core Plus SBCs, has announced an UP Xtreme hacker board built around Intel’s 8th Gen Whiskey Lake U-series Core processors. This is likely the fastest open-spec, community-backed SBC around, depending on your definition. 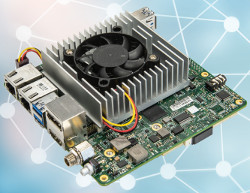 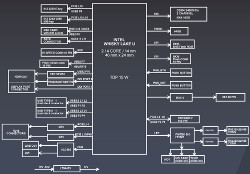 UP Xtreme and block diagram
(click images to enlarge)
Despite lacking full schematics, the UP boards barely qualify for our catalog of open-spec Linux hacker boards. However, DFRobot’s maker-oriented LattePanda boards, including the Kaby Lake based LattePanda Alpha, do not. In any case the 1.6 GHz/2.6 GHz, dual quad-thread Core m3-7Y30 on the LattePanda Alpha would not match the performance of the quad-core UP Xtreme model. Other boards that come close include Hardkernel’s more fully open-spec, quad-core Gemini Lake based Odroid-H2.

The only SBCs we’ve seen announced with the 14nm fabricated Whiskey Lake are Congatec’s 3.5-inch Conga-JC370 and thin Mini-ITX Conga-IC370. The Whiskey Lake U-series chips are notable for providing quad-core configurations with the same 15W TDPs of Intel’s earlier dual-core U-series chips. The quad-core models offer a performance increase of up to 40 percent compared to previous U-Series processors.

The Whiskey Lake processors integrate Intel Gen9 UHD Graphics 620 with 24 EUs. They’re also notable for supporting USB 3.1 Gen2 with up to a 10 Gbps transfer rate. Sadly, however, the UP Xtreme does not include a USB 3.1 port, perhaps to reduce costs.

Even still, the board is not likely to make our under-$200 cut-off for the hacker board catalog. As noted in the CNXSoft post that first revealed the SBC, the lowest cost i3-8145 Whiskey Lake model sells for $281, suggesting the lowest Xtreme price might be about $350 to $400.

At 120 x 120mm, this is the largest UP board yet. The SBC supports up to 16GB DDR4 and up to 128GB eMMC. In addition to offering a powered SATA interface, there’s a SATA option on the M.2 “B/M” key slot, and mSATA is available via the similarly multi-purpose mini-PCIe slot, which is accompanied by a SIM slot. An M.2 Key E slot is also onboard.

The stacked HDMI and DisplayPorts will no doubt give you 4K video, and you can probably get triple 4K displays if you use the onboard 3DP header with backlighting. Audio headers are also available.

The UP Xtreme is further equipped with 2x GbE and 4x USB 3.0 ports, plus additional USB and RS232/422/485 headers. There’s also a pair of STM32 I/O headers, which may offer GPIO related to the STM32 MCU. Like other UP boards, further expansion is available via a 40-pin “HAT” GPIO connector, which suggests it can run some Raspberry Pi HATs.

There’s no explanation for the 100-pin docking connector, which appears to offer four different options for I/O daughtercards (see spec list below). The UP Core Plus offers dual 100-pin connectors for various AI-enhanced add-ons such as the Cyclone 10GX-based AI Plus and the Myriad 2 based Vision Plus. However, the brief marketing copy on the UP Xtreme teaser page suggests that the UP Xtreme’s touted AI capabilities are instead launched via the M.2 and mini-PCIe slots. 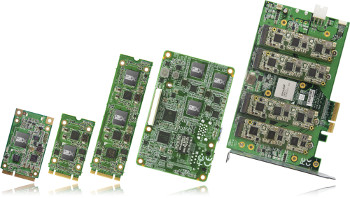 Specifications listed for the UP Xtreme include:

No pricing or availability information was provided for the UP Xtreme. More information may be found at Aaeon’s UP community UP Xtreme product page.

This article originally appeared on LinuxGizmos.com on March 19.